As with most successful reboots like Christopher Nolan's Batman franchise and X-Men: First Class, THE AMAZING SPIDER-MAN similarly concentrates on character over action. The first action scene doesn't happen until mid-way into the film. Marvel obviously intended for the new Spider-man franchise to focus on character development over action by hiring director Marc Webb, a former video director and helmer of the romantic comedy 500 Days of Summer with no action movies to his credits. Besides having a fitting last name, Marc Webb brings a light-hearted touch with more comedy from Spidey. In THE AMAZING-SPIDERMAN, Spider-Man on a cell phone made for a funny site talking through his mask. The superhero has come into a new age and become more vulnerable through his man-made gadgets.

Previews promised an untold story of Peter Parker in a new chapter based on the Marvel Comic Book by Stan Lee and Steve Ditko. The film begins with Peter Parker's backstory on how he came to be in the care of Uncle Ben (Martin Sheen) and Aunt May (Sally Field) after his parents fearing for their safety leave the young boy him behind. His parents mysterious departure and ultimate death in a plane crush haunts Peter Parker as he comes into his teens years as an outcast in school. He's distracted by his first teen crush Gwen Stacy. After finding his father's (Campbell Scott) hidden briefcase, Peter becomes obsessed with finding the truth behind his father's scientific work which leads him to Oscorp and the lab of Dr. Curt Connors (Rhys Ifan), his father's former partner. Peter aids Dr. Curt Connors with the missing puzzle for his experiment to regenerate limbs like reptiles. Suffice to say, the science advancement leads to monstrous results which requires Spider-Man's intervention. 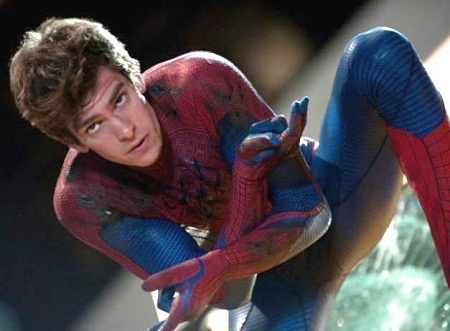 While the film's early scenes are new side of Peter Parker's life never seen, the rest of the action sticks to formula with regards to the transformation from Peter Parker to Spider-Man. This version of Spidey is a less conflicted super hero than Tobey Maguire's Spiderman. Unlike previous reboots of other super hero movies like Batman, the film has its share of dark moments, but for the most part is not as gloomy rather comedic in a comic book way. Perhaps the film will venture into darker territory in the sequel.

Besides The Social Network, we haven't seen much of Andrew Garfield, but Webb's film showcases his talents including his comedic side. Andrew Garfield's refreshing take helps you forget about the previous incarnation.  Tobey Maguire who? Garfield shows his range from a dramatic actor, to action hero, and funny leading man in this new chapter. The two actors are vastly different as Spider-Man, but equally good.  Although the females might give it to Garfield for being much sexier than Maguire, but after all, it could be because of the new tight-fitting, ribbed Spidey suit.

Garfield's on-screen girlfriend (and off-screen) Emma Stone brings classiness to the reboot as Peter Parker's first leading lady Gwen Stacy.  Seriously, have you ever seen a bad Emma Stone performance? Since her first appearance in Superbad, this young actress's talent extends to every genre. The chemistry between the two key actors is evident on screen and you can't imagine a better pairing.

Perhaps it helps to have a stronger leading lady. Gwen Stacy is far from your damsel in distress in this Spider-Man incarnation. Unlike the Mary Jane character in the first three films, this leading lady can take care of herself and is very capable at helping Spider-Man defeat the lizard. Thankfully, the female role isn't there simply to be kidnapped by the bad guy and rescued.

The remaining cast members Rhys Ifans, Denis Leary, Irrfan Khan, with Martin Sheen and Sally Field were equally good with a surprising turn of Denis Leary as Gwen's uptight father and police chief. Rhys Ifans like previous Spider-Man villains starts out with good intentions for his experiments, but ends up being consumed with power as the lizard. Ifans was convincing as the tortured scientist trying to balance his dark nature.

The CGI in THE AMAZING SPIDER-MAN has vastly improved. Spider-Man flying through the air finally looks natural. In some points, the action seems clumsy on purpose to show this kid still struggling to become this superhero. Webb takes you on a first-person ride through Spider-Man's point of view as the viewer goes along on the swing.  In 3D, the rollercoaster is even better. The lizard really came to life in 3D as well with close-ups of the eery looking monster/human that looked life-like. The 3D was evident during those moments, but for the most part you forget you're watching it in the third dimension since Webb avoided the gimmicky nature.

Although story doesn't take many liberties with the key events of the Spider-Man story, Garfield and his co-stars bring a quality to their performances that doesn't classify it merely as a remake of the Sam Raimi movies.