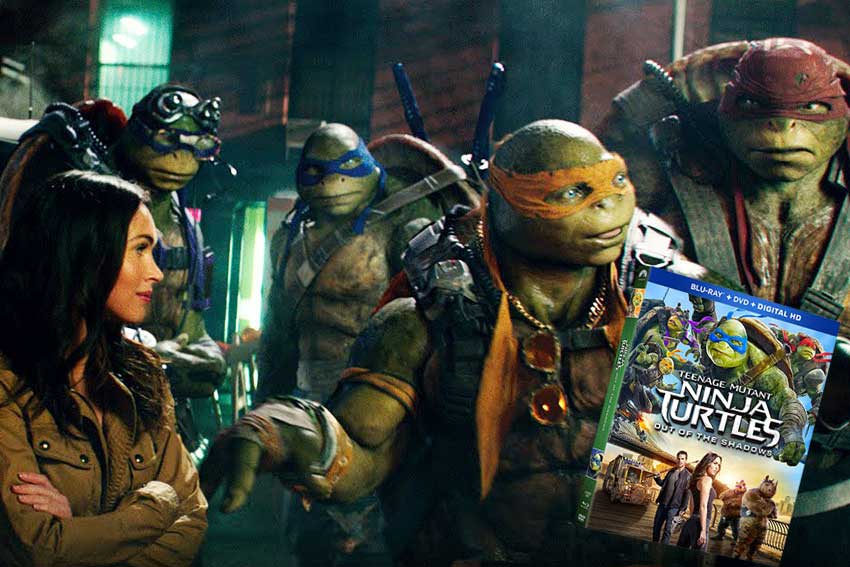 The blockbuster franchise film, TEENAGE MUTANT NINJA TURTLES: OUT OF THE SHADOWS will make it's way to DVD and On Demand on September 20 and digital release two weeks prior, September 6. Along with the new release, there are a few incentives to buy the all-new adventure on Blu-ray™ Combo Pack and DVD. The will also be available in 4K Ultra HD Blu-ray Combo Pack, Blu-ray 3D™ Combo Pack and Limited Edition Collectible Turtle Van Lunchbox and turtle masks in four colors. Look out for CineMovie's giveaway in the next coming weeks. Follow us below.

The TEENAGE MUTANT NINJA TURTLES: OUT OF THE SHADOWS Blu-ray, Blu-ray 3D and 4K Ultra HD Blu-ray Combo Packs include more than 40 minutes of action-packed bonus content. Peek under the shell at the film’s eye-popping special effects, take a look inside the Turtles’ tricked-out van, go behind-the-scenes to explore the Turtleverse and much more!  The film additionally features a Dolby Atmos® soundtrack* remixed specifically for the home theater environment to place and move audio anywhere in the room, including overhead.

Raphael, Leonardo, Donatello, and Michelangelo are back to battle bigger, badder villains, alongside April O’Neil and a newcomer: the hockey-masked vigilante Casey Jones. After supervillain Shredder escapes custody, he joins forces with two dimwitted henchmen, Bebop and Rocksteady, to unleash a diabolical plan to take over the world. As the Turtles prepare to take on Shredder and his new crew, they find themselves facing an even greater threat with similar intentions: the notorious Krang.  Hailed as “fun from start to finish” (Brian Medina, Movie Pilot), TEENAGE MUTANT NINJA TURTLES: OUT OF THE SHADOWS stars Megan Fox, Will Arnett, Laura Linney, Stephen Amell, and Tyler Perry in the live action film that is fun for the whole family.

For Blu-ray bonus features includes over 40 minutes of content listed below.