The Puerto Rican virtuoso guitarist, singer, and composer first came to attention in the 1960s with the holiday classic “Feliz Navidad” and his rendition of the Doors’ “Light My Fire.” The artist who has been blind since childhood has released both English and Spanish albums, and he’s embarking on a European tour. “It’s a lot of work,” says Feliciano about being on the road, and it’s certainly not a vacation as most people believe.

The producers behind History’s 10-hour series TEXAS RISING approached Feliciano to compose a song appropriate for the story about the Texas Revolution and the rise of the Texas Rangers against Mexican rule in 1863, starring Bill Paxton as Sam Houston, Olivier Martinez as Mexican General Santa Anna, Brendan Fraser, Ray Liotta and Jeffrey Dean Morgan.

“I wrote it specifically for the series. I don’t know how it came out of me, but it just did. They wanted something romantic to express the Hispanic side of the series so I came out with that particular song.” 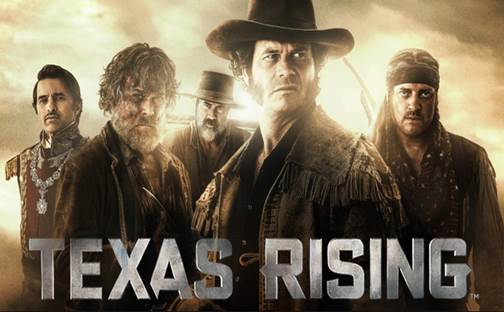 While the Puerto-Rican born musician knew of the Battle of the Alamo, Sam Houston and fallen heroes like Davy Crocket and Jim Bowie, he, like most Americans, was not familiar with what happened afterwards. He finds great value in a show like TEXAS RISING.

“This series really brings it to life. Also it will educate a lot of the young generation of Mexican-Americans who don’t know what happened in their country.”

He adds that what he most admires about the story is the “resilience of the Texan-American” and the great odds they were up against with Mexican General Santa Anna, a” very smart, shrewd and cruel general, even to his own troops.”

Jose Feliciano attended the premiere of TEXAS RISING held at the Alamo in San Antonio last week.  He tweeted out photos of the event with TEXAS RISING stars Ray Liotta and his old pal Kris Kristofferson who also contributed to the soundtrack.  The special event mainly served as a fund raising benefit to raise funds to save the historical landmark. He says the government isn’t doing enough to save the Alamo.

‘As usual, governments take a lot of credit, but they don’t want to help in saving of things. I think the Alamo should be preserved for generations to come so they can see.”

When it comes to music, Jose Feliciano has not retired from what he loves doing. Technology has made it a easier for the musician to work. Working in his own recording studio has enabled him to write and record with ease, something he was unable to do when he first started out in the 60s.

As far as the current music scene, Feliciano says he remains positive and open-minded about the new artists.

“I like almost everything. I’m not into some of the music that’s happening today.”

Feliciano’s “Feliz Navidad” remains one of his most popular Christmas songs ever, and the most played around the world during the holidays. The 1970 song is in the Grammy Hall of Fame for Christmas songs. “I don’t know how much higher I can get with that one,” he says. The song helped Jose Feliciano crossover to mainstream and he became one of the few Latino role models during the 70s. Did he pave the way the way for current Latino artists?

“I’m glad in whatever small way, maybe, that I paved the way for them, but I never saw it that way. I always saw it as trying to be successful in a career, and trying to do what I did.  If society feels like I opened the doors of the Latin artist, so be it. I’m glad of that role.”

The 69-year-old musician has no intention of slowing down, but when the day comes when he’s no longer on this Earth, what would he like his legacy to be?

Decades later, Jose Feliciano graces us with another beautiful ballet in “Igual Que Yo,” which can be found on the TEXAS RISING soundtrack. The TEXAS RISING mini-series continues the saga on Monday at 9pm on the History Channel.