And so he did. For one, MACHETE's super hero Danny Trejo is not your typical chiseled action star. Secondly, it's rare to see one strong woman in a Hollywood film, but MACHETE features two with Jessica Alba and Michelle Rodriguez as butt-kicking characters who need no rescuing. As in all Rodriguez films, Latinos are not the token minorities, and lastly the story centers on a politically charged topic -- illegal immigration. This is not your typical Hollywood film.

Robert Rodriguez's past films have broken many Latino stereotypes but he had yet to make a "Latino James Bond" which he wanted to make into the "first action superhero in Hollywood cinema," according to the author of Rebel Without A Crew. He envisioned MACHETE long before he made Desperado, but while on the set for the Antonio Banderas film, Robert met the Machete character -- Danny Trejo.

The knife-wielding assassin from Desperado has played bad guys since the start of his career in the early 80s, so he instantly took to the idea. After Desperado, Machete's possible leading man kept calling the Sin City director to persuade him to make it. It wasn't until the mock trailer appeared on Quentin Tarantino and Robert's double feature, Grindhouse, in 2007 that made the film a reality. Now fans were clamoring for Rodriguez to make the film. As a fan of grindhouse and Mexican 70s exploitation films, Robert Rodriguez set out to make his "Mexploitation" film, as he calls it, without studio backing.

"It's great to have an idea and go and make it without people having to question if that movie would work," he told us exclusively. "This movie would've been a hard sell, but now that they see it they're like, 'Hey this is a great movie.'"

Robert has come a long way since loaning his body to science to finance El Mariachi, but he still manages to remain self-reliant and resourceful. Robert's independence from Hollywood is possible through his Trouble Maker Studios which he built in his backyard. Located in Austin, Texas, the multi-hyphenate filmmaker works on his film's post production by multi-tasking various duties as director/writer, cinematographer, composer, editor, sound production and so on.

"Danny's getting a shot, we should be there for Danny" was the common sentiment from his colleagues, according to Robert.

Having acted in over 200 films, MACHETE's leading man has been typecast as killers, prisoners, and gang members for most of his career but Robert was the first to shed the menacing image. In the Spy Kids trilogy, the tattooed actor plays for the good side as the spy kids' inventor.

So what was it like for Danny as a leading man in MACHETE? The rugged-looking actor admits to CineMovie the best part of playing a superhero -- getting the girl in the end.

"The only difference as the lead was I got to kiss Jessica Alba," said the giddy and sweet-natured actor.

Danny's MACHETE co-star Michelle Rodriguez enjoyed working with the Predators actor, who she describes as a good-natured person with a "heart of gold," but she was most excited to work with Robert. The Avatar and Fast and Furious actress jumped at the chance to work with the Mexican-American director when he called to cast her as Luz, the leader of an underground network for illegal immigrants in MACHETE. She refers to Robert as a "cool cat" for creating a "massive voice for American Latinos."

While she believes the American-Latino impact has not been the same as the African-American influence in American cinema, Robert is definitely one person who has made a difference in creating "fun films" about U.S.-born Latinos.

In MACHETE, Robert definitely has fun with the genre and encourages audiences to view it as "huge sense of fun." Robert tells CineMovie the studio loved MACHETE, and he wouldn't be surprised if Hollywood took on more exploitation-style films including a MACHETE sequel or two as hinted from the end credits of the movie. Given the success of Sylvester Stallone's The Expendables, another old school action movie, Hollywood may jump on that bandwagon.

In the meantime, Robert Rodriguez continues making his films his own way with a fourth Spy Kids movie with new kids in the works and a sequel to this summer's successful horror film Predators which he produced. 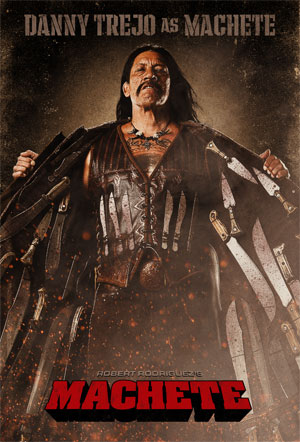