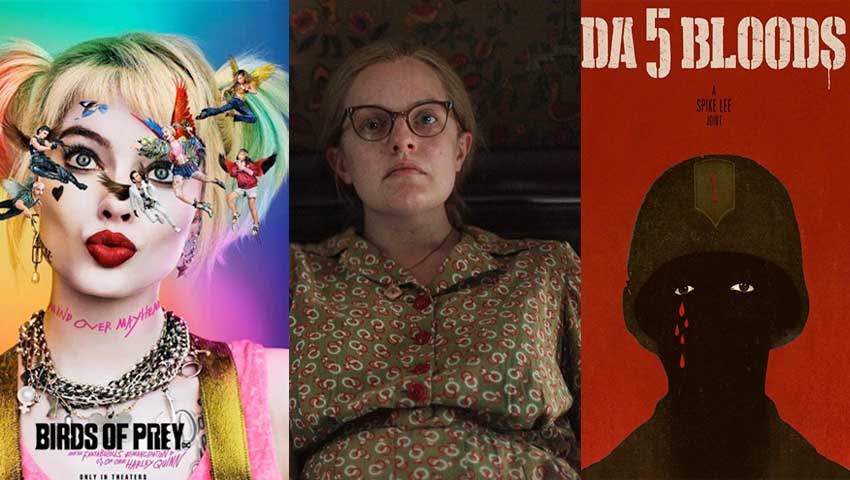 2020 is not your normal year as COVID-19 has forced movie audiences to shift their viewing to streaming services. To reflect the change, the  Hollywood Critics Association is now including movies and series in the 3rd annual HCA midseason awards. The nominations were announced Monday morning, and SHIRLEY starring Elisabeth Mossleads with seven nominations followed by Margot Robbie's BIRDS OF PREY and Spike Lee's DA 5 BLOODS. See the entire list below.

Every June, the members of the HCA vote on the best in film, television, and streaming for the first half of the year. “We weren’t 100% certain that we were going to do the Midseason Awards due to the coronavirus, but after seeing that there were hundreds of series and films released in 2020, we knew that we had to push forward and celebrate the work of the actors, filmmakers, and storytellers who released films and series during this incredibly difficult time,” notes HCA co-founder Ashley Menzel.

“After the entire world was forced to shut down due to the coronavirus pandemic, it became very apparent as an organization how much streaming platforms such as Amazon, Hulu, and Netflix have impacted and changed the industry. And with the recent launch of streaming services like Apple TV+, Disney Plus, HBO Max, and Quibi, streaming will only continue to change the traditional landscape of how we watch film and television,” adds HCA founder Scott Menzel. For this reason, the Hollywood Critics Association is pleased to announce that it has created two new award categories that will focus exclusively on streaming series.

For the Midseason Awards voting, the members of the Hollywood Critics Association organized a list of all 2020 films that were released theatrically, on VOD, and on various streaming platforms. There were over 195 feature length films in consideration and more than 100 series, between traditional television networks and streaming platforms.

Leading the nominations is Neon’s Shirley with a total of seven nominations including Best Picture, Best Actress, and Best Supporting Actor. Several films tied for second place including Cathy Yan’s Birds of Prey: And the Fantabulous Emancipation of One Harley Quinn, Spike Lee’s Da 5 Bloods, and Autumn de Wilde’s Emma.

Among the nominations for new streaming series, Hulu leads the way with a total of four nominations, followed by Netflix and Amazon with two nominations each.

The winners of the HCA Midseason Awards will be revealed on July 1, 2020.

Bad Education
Birds of Prey:  And the Fantabulous Emancipation of One Harley Quinn
Blow the Man Down
Da 5 Bloods
Emma
Never Rarely Sometimes Always
Onward
Shirley
The Invisible Man
The Vast of Night

Bad Education
Birds of Prey: And the Fantabulous Emancipation of One Harley Quinn
Emma
The Invisible Man
Shirley