How Toho Should Reclaim Godzilla From Hollywood

Originally created by Toho Studios in 1954, Godzilla (originally called Gojira in Japan) is a cornerstone of the Japanese kaiju genre. Kaiju is a Japanese word that literally translates as “strange creature” or “monster,” but the connotation goes beyond the literal definition. Kaiju also embodies social and cultural commentary in that the creatures are often also symbolic of a bigger problem facing mankind in general and the Japanese people in particular.

In the case of Godzilla, the creature is often seen as a direct metaphor for the atomic bomb, a concept understood but downplayed when the film was released in the United States. The original Japanese film, widely believed to be an allegory for the nuclear attack on Hiroshima and Nagasaki by American forces at the end of World War II, was altered in several key ways prior to being released to American audiences. These alterations involved the removal of about 40 minutes of the original, mainly containing explicit references in Japanese to the atomic bomb, and the addition of about 20 minutes of new footage in which an American journalist portrayed by Raymond Burr was introduced.

Nonetheless, the overall plot of the film, which included the subsequent complete destruction of Tokyo by the monster, cements Godzilla’s status as a direct metaphor for the atomic bomb during an era when nuclear anxiety was understandably both very real and very justified. Looking at the phenomenon that is Godzilla through current lenses, however, the idea of a monster as a single and narrowly focused metaphor doesn’t hold up under the record number of remakes, sequels, and alternate versions of the original film. 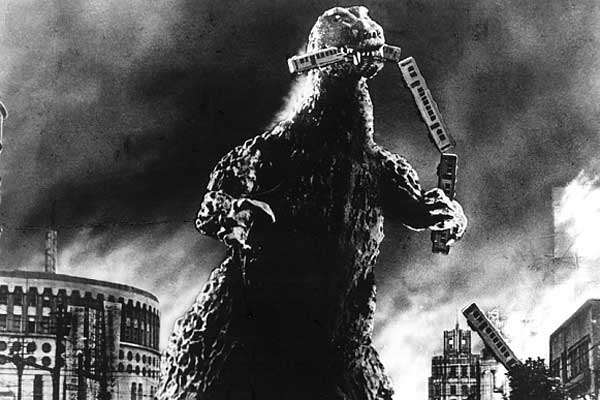 Over the course of more than 60 years, 28 different cinematic variations on the monster have entertained viewers. Ranging from futuristic to horrific, campy to classic, these films are still popular thanks to their wide availability on platforms such as iTunes and DTV. The key to this success and endurance seems to be not so much fear of a specific situation, such as destruction by a specific means only, but rather the realization that came with the creation of the atomic bomb that mankind truly has the ability to not only destroy each other but also to destroy the planet on which we all live. This universal realization and fear has not waned nor wavered in the decades since WWII. It is this factor more than anything that leads to Godzilla’s relevance and endurance over any other movie monster ever created.

In the wake of the Fukushima nuclear disaster that began in 2011, the impending remake of Godzilla by its original studio creators will likely carry even more relevance for current Japanese audiences. The kaiju in this instance is not only symbolic of any one incident of nuclear destruction, but also serves to embody the potential for mass destruction inherent in mankind’s pursuit of science and technology, often at the expense of the environment and the good of the planet.