The Dictator’s popularity may be credited with the fact that it touches on global atrocities through a humorous lens, thus making them easier to cope with. Furthermore, it features a fictional ruler from a made up country.

What may now be classified as one of the most controversial films of all time, The Interview centers on a plot to kill North Korean leader Kim Jong-Un. The decision on the part of screenwriter Dan Sterling and directors Seth Rogen and Evan Goldberg to include the notorious dictator in the plot by name - has proven to be costly.

In the weeks leading up to the film’s Christmas release, a group called Guardians of Peace hacked Sony Pictures - releasing damaging email exchanges between the studio’s employees. The group, which is purportedly located in North Korea, also warned they’d carry out a 9/11-style attack on any theaters showing the film. The threats prompted theater chains around the country to drop the film from their schedules - leading Sony to announce they’d be pulling it all together.

So is America missing out on something exceptional following The Interview’s removal from theaters? Not exactly, but it now seems like the patriotic thing to watch and send a message back to North Korea. Freedom of speech no matter how bad will not be threatened.

The film initially does a fine job of laying the groundwork for a relevant examination of journalistic integrity and the abandoning of valuable news segments in lieu of “what the people want.” 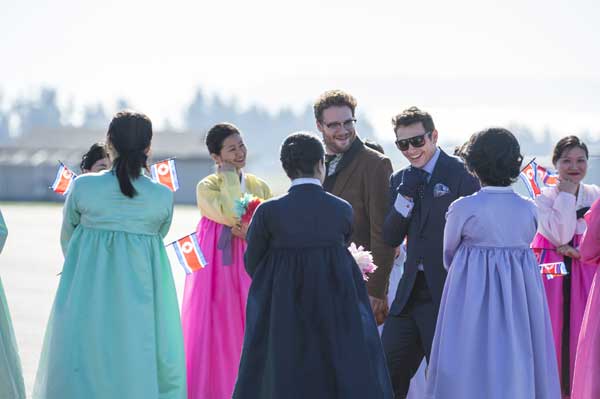 Aaron Rapaport (played with impressive reserve by Seth Rogen) has found success as the producer of “Skylark Tonight” a sensationalized news show hosted by the eccentric and amusingly clueless Dave Skylark (an irresistibly fun James Franco).

Dave sits down for interviews with the likes of Eminem - who comes out as gay by the end of their conversation - and Rob Lowe, who uses the show as a platform to remove his wig and reveal the jaw-dropping state of his real hair. It’s in these scenes that Rogen and Franco’s chemistry shines through as does their impeccable comedic timing.

Not surprisingly “Skylark Tonight” boasts impressive ratings and elevates their careers. But Aaron finds himself conflicted. Guilted by his peers - who are involved in more noble pursuits - he seeks to use the show’s popularity to do good rather than cover “Nicki Minaj’s vagina popping out at the Grammys.” Out of loyalty, Dave gets on board with his Sorkin-esque mission and goes as far as suggesting that they interview Kim Jong-Un (Randall Park) - who has publicly endorsed the show.

All of this is welcomely reminiscent of David Frost’s famed sit down with President Richard Nixon. Frost, who many dismissed as a hokey TV personality managed to get shocking revelations from Nixon and went on to have a respected career. The story later inspired the play and film Frost/Nixon. This parallel does not go unnoticed as Dave declares his interview with the Supreme Leader his “Frosty Nixon moment” and claims, “Ten years from now, Ron Howard is going to make a movie about us.”

Once the two announce their plan to travel to North Korea and conduct the interview - they’re approached by the CIA, who ask them to kill Jong-Un on behalf of the U.S. government. This prompts an engaging discussion of whether or not getting rid of him will be effective or allow room for another brutal dictator to emerge. According to the CIA, enough of those living in the country oppose the current regime and will work to put a better one in place following his demise.

All of this contributes to The Interview’s early promise. Unfortunately, it’s after this point that the film largely falls apart and leaves behind heaps of potential. The weighty themes and cultural critiques touched on are abandoned.

There was one prime reason I had strong feelings while watching the film - but none of them had anything to do with it’s portrayal of a dangerous living dictator.

It’s sexist and not the kind of sexist that mocks chauvinism and male entitlement - but the dangerous kind - the kind that you’re sure the writers and filmmakers aren’t aware they’re perpetrating.

Lizzy Caplan, who portrays the agent orchestrating Jong-Un’s execution, is an accomplished actress in her own right. From the small screen comedy Party Down to her Emmy-nominated turn in Masters of Sex, Caplan has proven to be a multifaceted performer. But you wouldn’t know any of that from The Interview. In an early scene, the camera (acting as the two men’s gaze) is on her breasts. She’s strikingly similar to Saturday Night Live’s parody character “woman from a male-driven comedy.”

As Sook, a member of the Jong-un’s security team, Diana Bang also plays a sexualized afterthought of a character. Though at least she gets to showcase her comedic chops.

In another scene, Jong-Un gives Dave a tour - showing off his weapons and tanks. After the two bond, Jong-Un informs him, “Do you know what else I like? Pussy.” A door opens and a line of half-naked women enter the room like cattle. A montage follows - showing the two engaging in sexual acts with the group.

The commodification of women on screen is nothing new. Films like Pain and Gain and The Wolf of Wall Street (to name a few) display women as material possessions that men can acquire. The fact that Jong-Un shows off the women as part of what he owns is disturbing. As is the idea that a group of women represents “pussy” and nothing else.

One could argue that this is intentional. That to depict these actions is not an endorsement of them but rather a satirization of how an erratic communist leader might behave. But with no female characters to counter this in the entire film - it’s difficult to stand behind that notion.

Some treasure’s emerge after the cleverly laid building blocks of the plot crumble. The fact that fake grocery stores mask the starvation plaguing the country as well as the idea that Jong-Un is so charismatic that he can make people believe he is distinguishable from the rest of humanity feel very real in a sea of homoerotic farce and dick jokes.

When the plot to kill Jong-Un gets underway - the film takes a shockingly violent turn that feels unwelcome in a comedy of this nature. The accidental death of one of the leader’s longtime guards is particularly jolting. 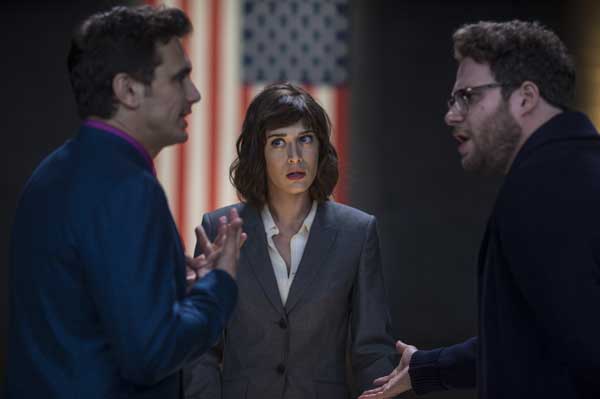 Where The Interview truly feels disengaging is during the finale where the actual televised sit down between Dave and Jong-Un takes place. As stipulated beforehand, Dave is only permitted to ask pre-approved questions - in order to contribute to his falsified public persona. But the two have a plan to topple these stipulations and use the interview to expose his misdoings.

Alas, the climax is uninventive and unexciting - leading the film to go out on a whimper.

Not surprisingly, comparisons have been drawn between The Interview and Charlie Chaplin’s 1940 satire The Great Dictator as well as Disney’s Oscar-winning 1943 animated film Der Fuehrer’s Face. The former has garnered renewed public interest. Though it contains the masterfully executed physical comedy Chaplin was known for - it’s also chilling and serves as an important historical reference. Only a fraction of these characteristics are present in The Interview.

Nonetheless, people have a right to see this film. Knowing that it may never be shown is startling because America’s experience with censorship is limited. Now the idea that countries like China and Iran ban and re-edit certain films doesn’t feel as far removed. I never thought I’d feel so privileged to have had the freedom to watch a movie in which Seth Rogen smuggles something in his ass.