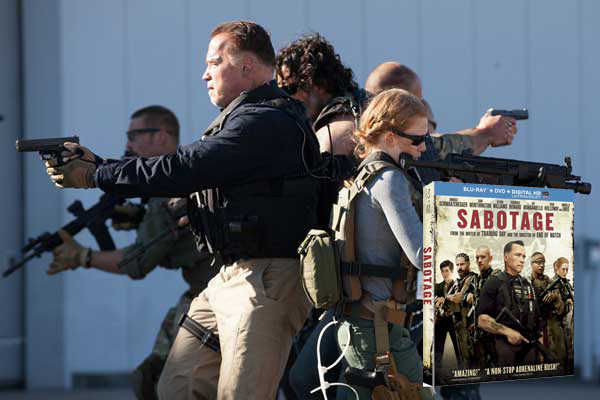 SABOTAGE may not have been box office gold, but that doesn't mean the movie starring Arnold Schwarzenegger wasn't good. The SABOTAGE Blu-ray™ and DVD is available July 22 and includes drastically different alternate endings.

Arnold Schwarzenegger leads an impressive cast with Sam Worthington, Olivia Williams, Terrence Howard, Joe Manganiello, Josh Holloway and Mireille Enos putting in good performances as adrenaline-fueled DEA agents being killed off one by one after the team stole $10 million in cash from a drug cartel leader.

Poor Arnie hasn't had much luck at the box office with most of his recent outings as a leading man tanking ("The Last Stand"), but in SABOTAGE he actually puts in a decent performance without his usual cockiness. There's a little more depth to this character than in previous films in that his character is haunted by his family's death at the hands of a drug cartel, and foul-mouthed, trashy task force aren't exactly your law-abiding agents, which makes for a very gritty and violent film. Director David Ayer ("End of Watch') is adept at bringing out the intensity from actors and scenes. We could only imagine it being twice the intensity on a big screen, but the film is equally as charged on the small screen.

The most interesting portion of the new Blu-ray and DVD is the bonus features. Included are multiple endings for SABOTAGE which are drastically different than the movie version. In one alternate scene, Olivia Williams goes mano-a-mano with Arnold's character. While I love seeing a woman kick Arnold's butt, it's probably physically impossible to take on the big guy and audiences may not have bought it.  The other alternates seem a little more plausible, but the movie ending seems to have been the right one. So if you don't like the movie version finale, you can always pick one from the extras.

Other extras include the "Making of Sabotage" and deleted scenes, but the alternate endings is certainly the best part of this new home release.