Why The Women of '300: Rise of an Empire' Saved The Movie

Not one but two tough chicks headline the follow up to Zack Snyder’s ground-breaking 300. Lena Headey returns as Queen Gorga, King Leonidas’ now widow, to lead the Spartans against Xerxes army after they defeat her husband’s army of 300.  In 300, we saw the Queen’s potential leadership skills and in this film, she gets to flex more muscle as the heir to the Spartan throne.

Than there’s Eva Green as Artemisia , the formidable General of the Persian navy, bent on destroying the Greeks.  She’s so tough she doesn’t even fear her own boss when she defies Xerxes orders. There have been villainous female characters, but Artemisia is like no other. Unlike femme fatales like Catherine Trammell’s Catherine Trammell (Sharon Stone) or Alex Forrest in Fatal Attraction (Glenn Close), Artemisia doesn’t use her sex appeal to gain ground on her male enemies, but acts like a man dressed in cool dominatrix outfits.  Even when she tempts Themistokles (Sullivan Stapleton) by flashing her breasts to win him over to her side, she remains in control and on top, literally.  Those crazy, wild eyes match her black heart, and Themistokles is foolish and weak to give into his manly wants. And she’s so badass you sort of root for her. 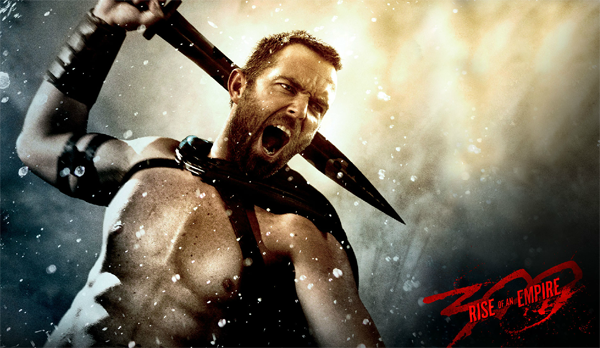 Artemisia and Queen Gorga trump the lead Sullivan Stapleton. As the Greek general Themistokles, Stapleton’s character isn’t as fleshed out as Artemisia, nor is it unique.  The role is rather bland compared to Gerard Butler’s King Leonidas and less commanding.  There’s no investment with the Greek side.  While the films tries to create the same chemistry among the soldiers in 300, it doesn’t really come through in 300: RISE OF AN EMPIRE. It’s not to say he’s a bad actor, but they just didn’t give him much to work with.

But don’t worry. The tradition of bloodletting and gutting continues in the follow up to 300, but instead of spilled blood on land, the pillage takes place on the high-seas with creative art of war techniques that prove very entertaining.

300: RISE OF AN EMPIRE opened to an estimated $45 million, 36 percent off from the first film, but still decent for a March opening.

300: Rise of An Empire' Cast Interview: Living Up To The Abs