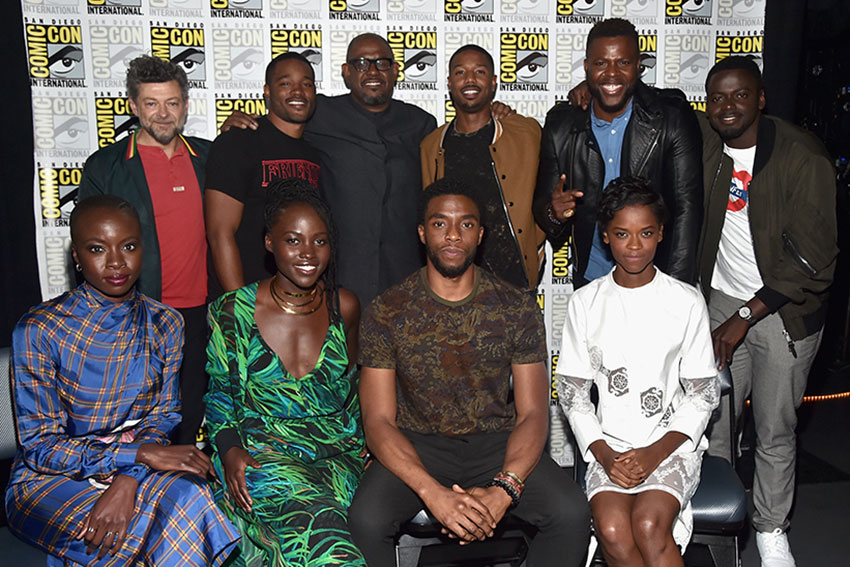 The clip begins with T’Challa and his team blending in as guests at a casino watching a transaction between Andy Serkis’s Klaw and Martin Freeman’s character from CAPTAIN AMERICA: CIVIL WAR.  Black Panther’s warriors played by Danai Gurira, Lupita Nyong'o and Letitia Wright are looking beautiful in evening gowns and T’Challa himself in a tuxedo. Gurira’s Okoye wants to jump into action before anything is exchanged but T’Challa wants to wait until it’s in Klaw’s "hand."

We already know Danai Gurira can wield a fierce samurai sword in THE WALKING DEAD, but wait until you see her handle a spear. During that casino scene, Okoye’s hand purse transforms into a spear and she proceeds to kick some serious butt. The crowd went wild with Gurira and Lupita Nyong’o stunts.

We may now know why Andy Serkis’ Ulysses Klaue character goes by the name Klaw. He lost an arm in AVENGERS: AGE OF ULTRON, and in the exclusive clip, we now see that he has some sort of creepy prosthetic arm that doesn’t look high-tech until pulling it back reveals some sort of futuristic laser gun, probably harnessed from all that alien technology left behind.

In CAPTAIN AMERICA: CIVIL WAR, we don’t see how T’Challa transforms into the Black Panther suit, but in one of the action sequences, Boseman is running after someone and when he leaps like a cat, the black suit envelopes him. That got a thunderous cheer from the crowd.

Marvel films are not short of action, and the stunts and choreography in BLACK PANTHER introduce a different fighting style reflective of that region.

We already know from the teaser trailer that Michael B. Jordan’s Erik Killmonger has his eye on the throne and T’Challa stands in his way.

Spoiler Alert: Stop reading if you don’t want to know what happens next.

T’Challa and Killmonger are fighting each other when Killmonger transforms into a dark gray panther suit.  That revelation earned a collaborative “ooh” from the crowd.

After the lights came up, the Comic Con Hall H crowd jumped to their feet to a standing ovation. That was also the first time the cast had seen any completed footage and were so excited they hugged each other and congratulated the director. No word if that footage would be released, but hopefully the rest of the world can see the amazing footage displayed at Comic Con.