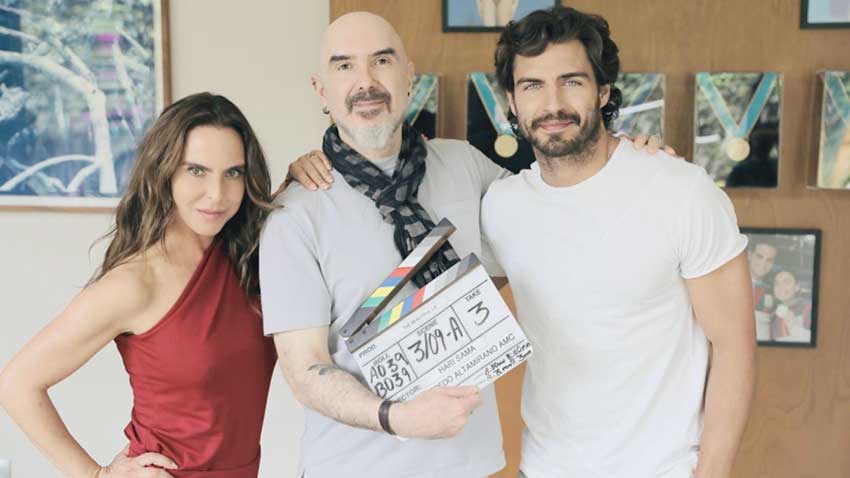 Kate del Castillo is starring and executive producing a new series for Pantaya, the Spanish premium streaming service. The working title, The Beautiful Lie started production on the series in Mexico City starring alongside Maxi Iglesias, and directed by Hari Sama. The six-part drama series is a contemporary love story based on Leo Tolstoy's novel, Anna Karenina. Read the official press release below.

“The Beautiful Lie” tells the story of Ana Montes de Oca (Kate del Castillo), a Mexican gold-medal-winning Olympic diver and national hero, who falls in love with a young musician. What follows is a journey of self-discovery, one that society, unfortunately, doesn’t embrace.

See the press release below for more information.

“The Beautiful Lie” stars del Castillo as a gold-medal-winning Olympic diver and Mexican national hero. Her character, Ana Montes de Oca, falls in love with a young musician and goes on a journey of self-discovery—one that society, unfortunately, doesn’t embrace.

“This project is very important to me since it’s a Tolstoy classic that we are recreating and the story continues to be relevant today”, says series producer and star Kate del Castillo. “‘The Beautiful Lie’ marks the fourth project I have acted in and produced under my production company, Cholawood Productions, the first with Pantaya and Endemol Shine Boomdog. It’s a joy to be able to shoot a production of this caliber in my home country after many years of not being able to work here. No better way to celebrate than with a story that features the beauty, strength, and aristocracy of Mexico with archetype characters that we can all identify with”, she said.

“I feel very happy to be part of this amazing project for several reasons, beginning with the admiration and affection that I have for Kate after having worked with her on two previous projects, and being a colleague who does so much and makes you feel like you can do anything. Her generosity, dedication, and responsibility make you want to be like her, always seeking the best results,” Spanish actor Maxi Iglesias commented. “I am truly happy and ready to give 100% to this project, once again outside of my country, getting to know a little more about Mexico, its people, and the team. Looking forward to working with Hari, the director, and with the awesome production team that has been assembled for this beautiful project”, he concluded.

“This series has become a very personal project for me, and I’ve been very fortunate that in the words of the producers Endemol Shine Boomdog, Cholawood and Pantaya, this limited series has been considered as almost an auteur film, that I have been able to give a lot of myself to. This is something that makes me feel very happy and touched”, Director Hari Sama said.

“We are truly excited to be kicking into production, and especially with the team of actors and creatives assembled”, Mario Almeida, Pantaya’s Head of Content commented. “We are very happy with how this incredible limited series is coming together and excited to share this beautiful story with the audience.”

“This adaptation of Tolstoy's novel contains universal elements that resonate with the lives of any couple today. What happens when love matures, when it is touched by routine, when we decide to perpetuate it or take a 180° turn and obey our impulses? The decisions we make, and their consequences portrayed in the context of a 'modern' society, while exploring new ways of surviving as a couple, continues to carry the same taboos and social pressure, mainly on women, two centuries later”, Jerry Rodriguez, SVP Head of Scripted, Endemol Shine Boomdog said.

As previously announced, “The Beautiful Lie” is a modern retelling of Tolstoy’s Anna Karenina, one of the greatest love stories of all time and based on the 2015 TV adaptation by Endemol Shine Australia. Acclaimed Spanish writers Almudena Ocaña and Aurora García Tortosa (“Elite”) are also attached to the series.