Academy Award® nominee and best-selling author, journalist and filmmaker Sebastian Junger and Emmy®-winning filmmaker Nick Quested bring the human story behind the Central America's migrant caravan through Mexico in a new documentary for the National Geographic Channel. BLOOD ON THE WALL premieres Wednesday, September 30, at 9/8c on National Geographic. Watch the compelling trailer and new poster.

While the so-called U.S. President claims the migrant caravans are criminals and terrorists, BLOOD ON THE WALL humanizes the plight of the many migrants looking for a better life in the United States. The feature documentary also tackles the toil it's also taking on Mexico along with the drug trafficking and the political corruption that plagues that country.

The film includes interviews with not only the migrants but others involved in human and drug trafficking like narcos, farmers and former diplomats who speak out about the political corruption. 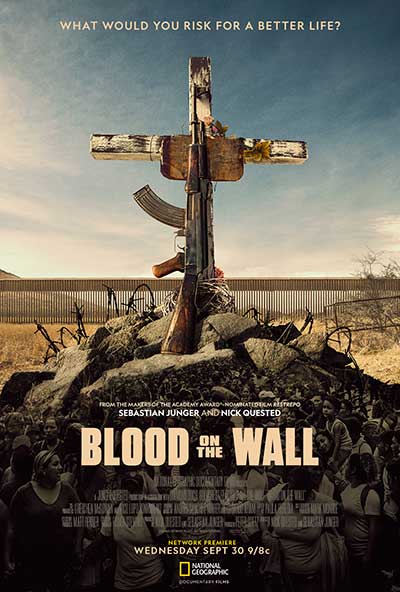 With the trademark inside access unique to National Geographic and the filmmakers, BLOOD ON THE WALL explores the internal and external influences on Mexico as it deals with the key issues of migrant caravans from Central America heading to the U.S., the dangerous but resilient traffickers fueling the cross-border drug trade and how corruption has impacted politics at every level.

Featuring unprecedented first-person accounts from migrants on the road, farmers, narcos, security enforcers, journalists, presidents and diplomats, BLOOD ON THE WALL tells the story of how traffickers, corrupt politicians and well-positioned business interests have seized wealth and power, leaving everyday citizens desperately fighting for survival or needing to flee elsewhere for a better life.

Exploring Mexico’s tension with its northern neighbor and the way regional U.S. policies over the past few decades have helped fragment Mexico’s political order, the film looks at the ways in which the country has been weighed down by disorder and crime throughout the 21st century.

Closely following a caravan of migrants — some with young children — as they travel from Honduras, Guatemala and other Central American nations across Mexico toward the United States, the film depicts the daily struggles of life on the road without certainty of a better future. The border these migrants are seeking to be granted entry to is the very same that narco-traffickers cross regularly as they move drugs and money back and forth between Mexico and the U.S.

“The issues Mexico faces right now are layered and complex and ultimately intertwined with how the U.S. has approached foreign policy and immigration since the Reagan era. The history and the future of the country and its inhabitants is so bound up in the larger forces at work in the region, it’s vital to look at them holistically. We’re reaching a juncture in this election year when understanding the socio-political landscape of our neighbors is incredibly important for people before going into a voting booth,” said director Sebastian Junger.

“Systemic change is top of mind for a lot of people right now and that conversation needs to include U.S. foreign policies that only enhance the inequities across our southern border, allowing ruthless leaders and cartels to take advantage of people for their personal gain. Humans are remarkably resilient, but when you disenfranchise them, taking away their peace and stability, it can leave them in a very desperate situation. The urgency of tackling these nuanced, extremely complex issues — caravans, cartels and corruption — has never been greater,” added director Nick Quested.

· Ludy, a Honduran teenage girl with no family who joins a caravan heading north.

· Sara, her children and grandchildren, from Guatemala who have also joined the caravan to the U.S.

· Santiago, a poppy farmer in Mexico.

· Anonymous drug runners based on the southern U.S. border.

BLOOD ON THE WALL is National Geographic’s second collaboration with filmmakers and producing partners Junger and Quested following the 2017 duPont-winning feature documentary Hell on Earth: The Fall of Syria and the Rise of Isis.