In 1979 during Jimmy Carter's presidency, Americans were taken hostage in Iran. A rescue attempt by U.S. Special Forces in 1980 was a failure and cost President Carter a second term. DESERT ONE, a new documentary feature by Barbara Kopple with unseen footage, interviews with former hostages, President Carter and his VP Walter Mondale, and the hostage takers arrives on the 40th anniversary.

The DESERT ONE press release (see below) promises never before seen archival material and illustrated through animation. The perspective includes both sides on the American version and from the point of view of Iranians at the time. An interesting aspect of the story is that the U.S. Special Forces was fairly new and inexperienced.

DESERT ONE arrives Friday, August 21, but there's no mention on what platform. See the full announcement below. 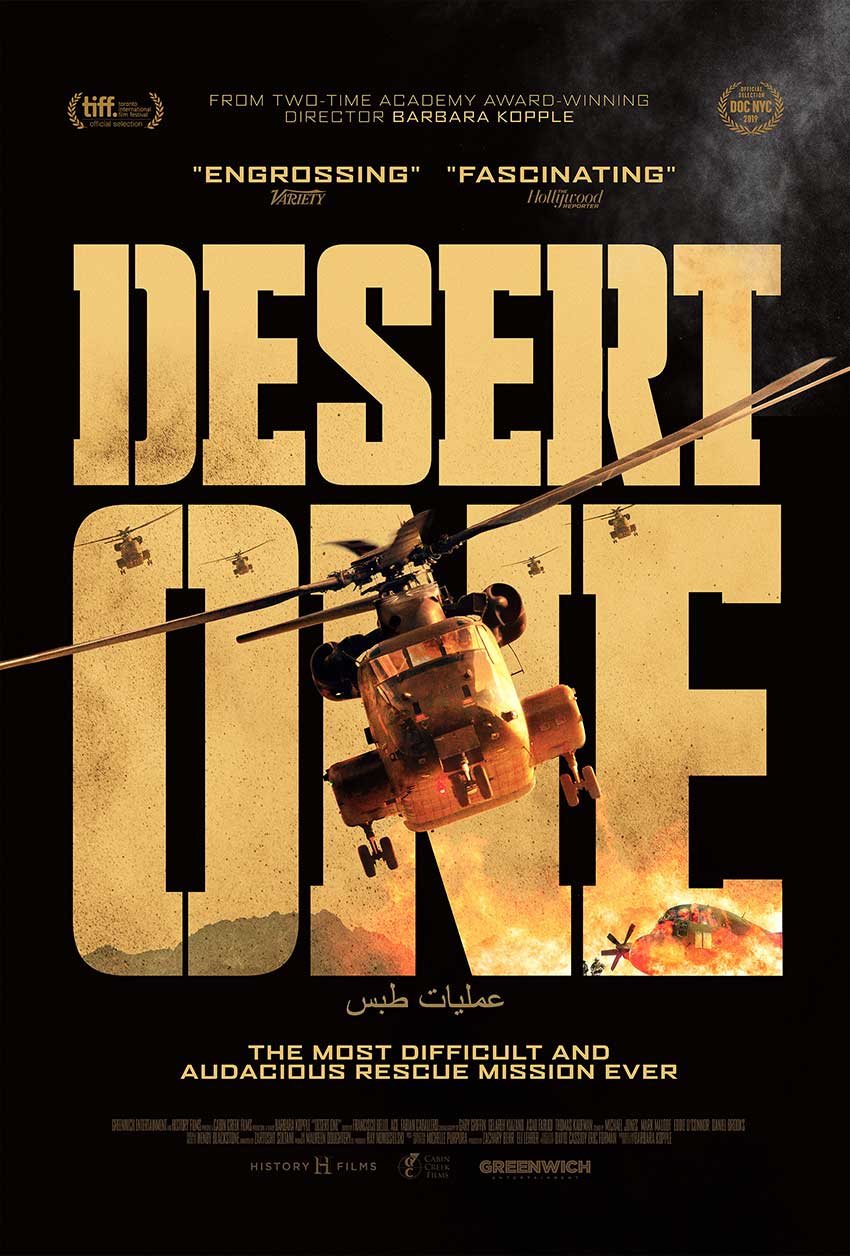 Documentary Recounts the Story of the 1980 Rescue Attempt by U.S. Special Forces of American Hostages Being Held in Iran

New York, NY – 40 years later, one of the most daring military rescue attempts in US history is coming to the big screen. Today, Greenwich Entertainment announced the acclaimed documentary feature “Desert One” from two-time Academy Award® winner Barbara Kopple (“Harlan County USA” and “American Dream”) will be released on Friday, August 21. The documentary feature, produced by HISTORY®, recounts the April 24/25, 1980 thrilling attempt to rescue 52 US citizens who were taken hostage by Iranian revolutionaries in Tehran.

“Desert One” is produced by Cabin Creek Films. Kopple produced and directed the film, with David Cassidy and Eric Forman serving as producers. The film includes a wealth of unearthed archival sources, as well as intimate interviews with President Jimmy Carter, Vice President Walter Mondale, Ted Koppel, former hostages, journalists, and Iranian student revolutionaries who orchestrated the take-over of the American Embassy in Tehran. Evocative new animation and never before heard satellite phone recordings of President Carter talking to his generals as the mission unfolds, bring audiences closer than anyone has ever gotten to being on the inside for this history making operation.

“This was a roller coaster ride of a story well worth telling,” said filmmaker Barbara Kopple, “It is a film about U.S. leadership and gumption, our leaders taking responsibility - even when things go wrong - and courage in the face of adversity. And, of course to address our relations with Iran - and hearing their side of the story can make us reflect. This is a story that few remember or even know and it might inspire us now.”

“Desert One” is the story of Americans working together to overcome the most difficult problem of their lives. When radical Islamists take fifty-two American diplomats and citizens hostage inside Iran, Carter secretly green-lights the training for a rescue mission. America’s Special Forces soldiers also find themselves in uncharted territory, planning a top-secret rescue of unprecedented scale and complexity. Driven by deep empathy toward the kidnapped Americans, the heart-pounding and unforeseen events the rescue team participated in will forever unite them.

The film also presents Iranian perspectives on this important moment in their history. A female Iranian crew filmed overlooked accounts inside that country, one from a man who had been an 11-year-old boy riding a bus through the desert on the night of the mission. As tensions once again rise between the governments of Iran and the U.S., old wounds remain painfully current for many who poignantly detail their recollections in “Desert One.”

Founded in 2017, Greenwich Entertainment is an independent film distribution company specializing in distinctive, theatrical-quality narrative and documentary features. In 2018, Greenwich handled the record setting theatrical release of Jimmy Chin and Chai Vasarhelyi’s  Academy Award-Winning Documentary Free Solo, which grossed over $17M at the North American box office. In 2019, Greenwich released two of top the documentary hits of the year with Andrew Slater’s Echo in the Canyon ($3.3M) and Linda Ronstadt: The Sound of My Voice ($4M) from Oscar winners Rob Epstein and Jeffrey Friedman. Recent narrative releases include Isabel Coixet’s  The Bookshop starring Emily Mortimer and Bill Nighy and Madeleine Olnek’s Wild Nights with Emily starring Molly Shannon. Upcoming releases include James Erskine’s Billie and Ebs Burnough’s The Capote Tapes. Greenwich is led by an experienced management team that has overseen more than 150 theatrical releases generating over $100 million at the US box office and garnering 8 Oscar Nominations. www.GreenwichEntertainment.com

Cabin Creek Films is a production company run from offices in New York City founded and overseen by Barbara Kopple. We have partnered with Discovery, HBO, OWN Network, Viacom, Sony, Starz, TCM, ABC, Sprint, Dove, American Greetings, and many others. Theatrical films include Gigi Gorgeous: This Is Everything, Miss Sharon Jones!, Hot Type: 150 Years of The Nation, Shut Up & Sing, Havoc starring Anne Hathaway and Joseph Gordon-Levitt, My Generation, Wild Man Blues, American Dream and Harlan County USA among many others. Nonfiction productions for television include Killing the Colorado (Discovery), Shelter (Al Jazeera America), Running From Crazy (OWN), Gun Fight (HBO), The House of Steinbrenner (ESPN 30 For 30), Woodstock: Now and Then (History), The D.C. Sniper’s Wife (TruTV), A Conversation with Gregory Peck (PBS American Masters), Fallen Champ: The Mike Tyson Story (NBC), Friends for Life: Living with AIDS (Disney), the ABC docu-series The Hamptons, and episodes of hit series Oz and Homicide: Life on the Streets. Cabin Creek Films has received numerous awards for excellence and continues to reach audiences around the world with compelling documentaries that reveal the extraordinary in everyday life.

HISTORY®, now reaching more than 96 million homes, is the leading destination for award-winning series and specials that connect viewers with history in an informative, immersive and entertaining manner across all platforms. The network’s all-original programming slate features a roster of signature series including “Pawn Stars,” “American Pickers,” “The Curse of Oak Island,” “Alone” as well as the hit drama series “Vikings” and “Knightfall.” The HISTORY website is located at history.com. Follow us on Twitter at twitter.com/history and Facebook at facebook.com/history.