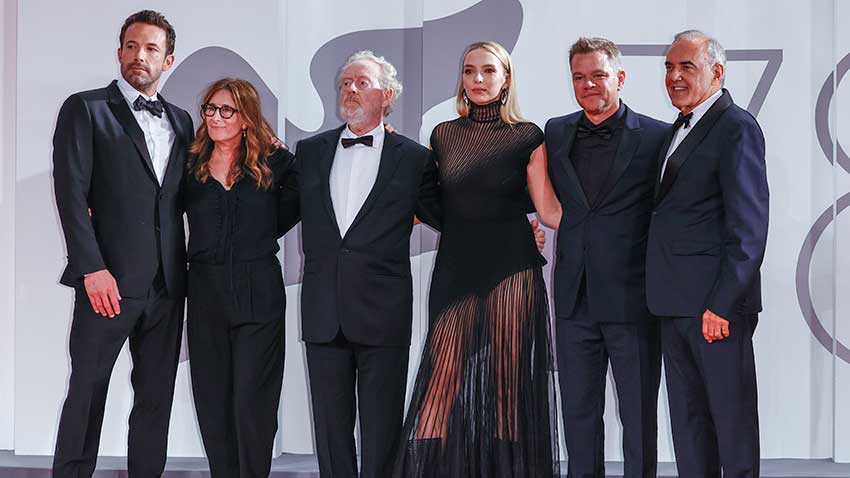 THE LAST DUEL received its world premiere at the 78th Annual Venice International Film Festival Friday night with the film's director Ridley Scott, co-screenwriter/producer Nicole Holofcener and stars Matt Damon, Ben Affleck and Jodie Comer. However, the showstoppers were Ben Affleck and his date Jennifer Lopez in their first red carpet appearance. See the photos below.

Matt Damon posed alongside his wife and his long-time friend Affleck also brought along his super-famous girlfriend Jennifer Lopez in a provocative dress. Affleck couldn't keep his hands to himself along the red carpet, and of course, the photos went viral. Missing from the group photo was Adam Driver who skipped the festival.

Before the red carpet was held at the renowned Lido, Ridley Scott was honored with the festival's Cartier Glory to the Filmmaker Award for his contributions to the film industry.

THE LAST DUEL will be released in movie theaters on October 15 and written by Affleck, Damon and Holofcener. The film is set in 14th Century France, the thought-provoking drama takes place in the midst of the Hundred Years War and is based on actual events that pit two friends against each other when one is accused of seducing the other's wife.

More about THE LAST DUEL
A historical epic, “The Last Duel” is a gripping tale of betrayal and vengeance set against the brutality of 14th century France. The film, which opens in theaters nationwide this October, is a cinematic and thought-provoking drama set in the midst of the Hundred Years War that explores the ubiquitous power of men, the frailty of justice and the strength and courage of one woman willing to stand alone in the service of truth. Based on actual events, the film unravels long-held assumptions about France’s last sanctioned duel between Jean de Carrouges and Jacques Le Gris, two friends turned bitter rivals.