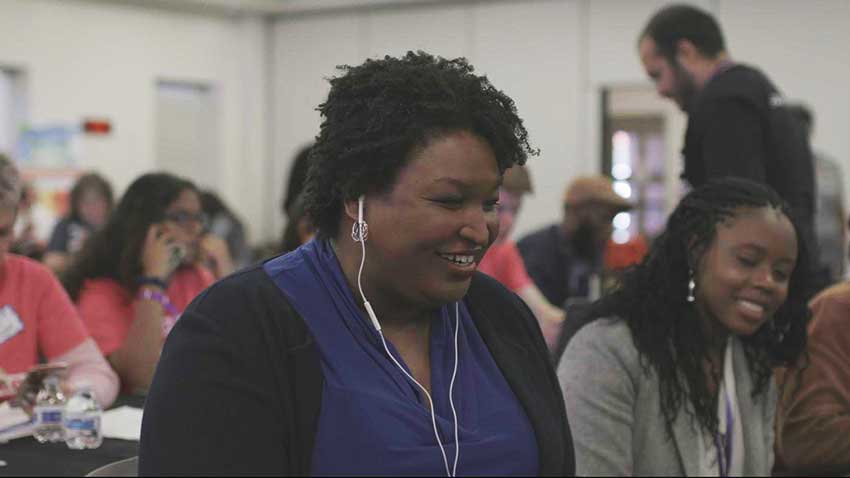 Voter suppression is a hot button issue right now, and Oscar-nominated and Emmy-winning filmmaker Liz Garbus and Oscar-nominated filmmaker Lisa Cortés tackle the subject in an Untitled Voting Rights documentary featuring former Alabama gubernatorial candidate Stacey Abrams which Amazon Studios has acquired. The announcement doesn’t reveal whether the documentary will stream before the 2020 primaries in November but that it will be this year. See the official press release.

See more details about the new documentary below

The documentary examines the often overlooked, yet insidious issue of voter suppression in the United States in anticipation of the 2020 presidential election. The film interweaves personal experiences with current activism and historical insight to expose a problem that has challenged our democracy from the very beginning. With the perspective and expertise of Abrams, the former Minority Leader of the Georgia House of Representatives, the documentary will offer an insider’s look into laws and barriers to voting that most people don’t even know is a threat to their basic rights as citizens of the United States.

“We are honored to be working with brilliant filmmakers Liz Garbus and Lisa Cortés and the remarkable Stacey Abrams on this timely and important documentary,” said Jennifer Salke, Head of Amazon Studios. “In this critical election year, Stacey's expertise and fearless stance against voter suppression will resonate strongly with audiences everywhere and can inspire positive change in supporting all Americans’ right to cast their vote.”

“Working with Stacey Abrams is the honor of a lifetime,” Garbus and Cortés said. “The story of voting rights is not just one of the Civil Rights Movement and the 1960’s. It’s a story for right now. It’s a monster movie where you think you’ve mortally wounded the beast, but it keeps rearing its ugly head, as last week's primary in Georgia so painfully demonstrated. And nothing less than democracy is at stake.”

“Raising the alarm about voter suppression is critical to the integrity of our democracy,” Abrams said. “The failure of state leaders in Georgia and other states across the country to protect the rights of voters, as seen in the 2018 election and 2020 primaries, must be exposed and it must be stopped. Justice in our criminal justice system and the sacred right to vote are not equal for all Americans and we must find a way to change these systematic inequalities. As the 2020 election approaches, this documentary will help voters realize the power of their voices, and it will inspire them to overcome the obstacles of voter suppression.”

The project was strategically assembled by UTA and was a collaborative effort between the company’s Independent Film Group, Alternative Television, and Culture & Leadership divisions. UTA Independent Film Group negotiated the deal on behalf of all parties. Additionally, Abrams is represented by UTA.

Stacey Abrams is a New York Times bestselling author, serial entrepreneur, nonprofit CEO and political leader. She served for 11 years in the Georgia House of Representatives, seven as Democratic Leader. In 2018, Abrams became the Democratic nominee for Governor of Georgia, winning more votes than any other Democrat in the state’s history. Abrams was the first black woman to become the gubernatorial nominee for a major party in the United States, and she was the first black woman and first Georgian to deliver a Response to the State of the Union. After witnessing the gross mismanagement of the 2018 election by the Secretary of State’s office, Abrams launched Fair Fight to ensure every American has a voice in our election system through programs such as Fair Fight 2020, an initiative to fund and train voter protection teams in 20 battleground states. Over the course of her career, Abrams has founded multiple organizations devoted to voting rights, training and hiring young people of color, and tackling social issues at both the state and national levels. She is a recipient of the John F. Kennedy New Frontier Award and a current member of the Board of Directors for the Center for American Progress.

Liz Garbus is a two-time Oscar-nominee, two-time Emmy winner, Peabody winner, Grammy nominee, DGA nominee and BAFTA nominee. Lost Girls (Netflix, 2020), which made its world premiere at the 2020 Sundance Film Festival, was Garbus’ narrative feature debut, starring Amy Ryan, Gabriel Byrne and Thomasin McKenzie. Garbus’ miniseries, Who Killed Garrett Phillips?  (HBO, 2019), examines the 2011 murder of 12 year-old Garrett Phillips and the subsequent trial of Oral “Nick” Hillary, a black man in a small, rural, mostly white community. The Fourth Estate  (Showtime, 2018) was nominated for a 2018 Emmy for Outstanding Documentary or Nonfiction Series, BAFTA TV Award, a Cinema Eye Honor for Outstanding Achievement in a Nonfiction Series and a Humanitas Prize. What Happened Miss Simone? (Netflix, 2016) was nominated for a 2016 Academy Award for Best Documentary Feature, and received a Peabody Award and six Emmy nominations including Best Directing. Her past works include A Dangerous Son (HBO), which won a 2018 Peabody Award; Nothing Left Unsaid: Gloria Vanderbilt & Anderson Cooper (HBO), which made its world premiere at the 2016 Sundance Film Festival; and Love, Marilyn (StudioCanal and HBO), a Gala Premiere at the 2012 Toronto International Film Festival. Bobby Fischer Against The World won the 2011 UK Grierson Award for Best Cinema Documentary and earned an Emmy nomination for Best Documentary Special.

Lisa Cortés is an award-winning film producer and director. The film Precious (2009), which she executive produced, received the Audience Award and Grand Jury Prize for Best Drama. Marking the acting debut of Gabourey Sidibe, the film was nominated for six Academy Awards and won two. 2019’s The Apollo, an HBO documentary, explores African American cultural and political history through the story of the legendary Apollo Theater. Her directorial debut, The Remix: Hip Hop X Fashion ( 2020), traces the impact of street fashion and African American creativity on global cultural trends. Her early career as a music executive was launched at the iconic Def Jam label and Rush Artist Management; she also was VP of A&R at Mercury Records, and founded the Loose Cannon label. Her film productions have received over 70 international awards and nominations.