First Look at EXODUS: GODS AND KINGS with Christian Bale 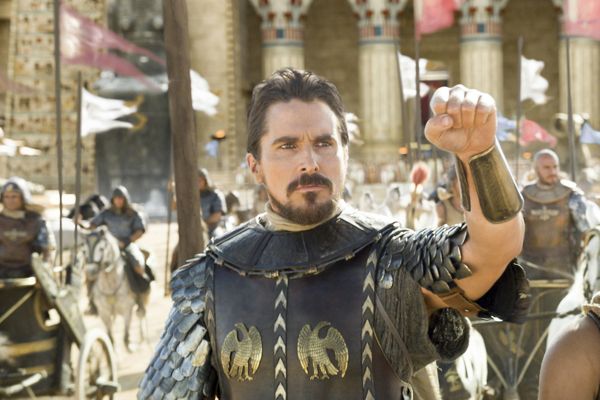 A second trailer for EXODUS: GODS AND KINGS starring Christian Bale as Moses is out, but CineMovie got more of a scoop with an advance sneak peek at six scenes from the movie that looks to be of Gladiator proportions.

Directed by Ridley Scott (Alien, Gladiator), the epic retelling of the Moses story will be one to look forward to when it opens December 12. About six scenes were shown at the Fox Studios in Los Angeles where Christian Bale made an appearance after the first ever preview.

EXODUS: GODS AND KINGS producer Jenno Topping introduced each clip, and said the production was a “nightmare” because of the elements including a sand storm and all sorts of animals. In one of the clips, we see what she was talking about. She noted the music and special effects were a temp track, but it sounded and looked good regardless.

The first scene introduces us to Moses and Rhamses (an unrecognizable Joel Edgerton) as cousins empowered by their father figure, the Pharaoh Seti to be good to each other. Now we know how that turns out. Moses and Rhamses then go to war against the Hittites, and Moses is obviously the better warrior in the fight and saves Rhamses, but we get a hint of Rhamses animosity towards his cousin. 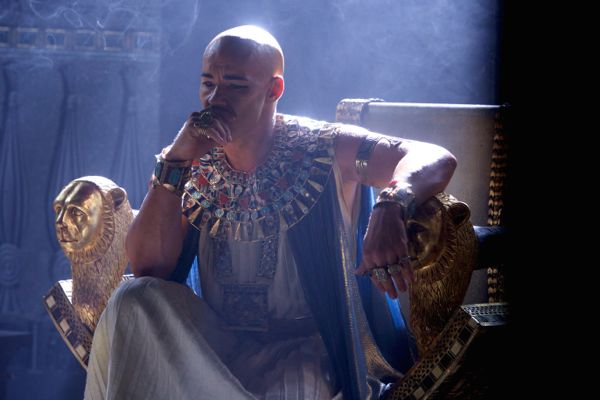 The next scene introduces us to Ben Kingsley as a Hebrew slave and his first interaction with Moses who later breaks the news that he’s actually born a Hebrew. Jump to the next scene in which Rhamses reveals to Moses that he’s in on his secret. To prove it, he brings his mother’s slave who is actually his sister, and threatens to cut off her hand if she doesn’t tell the truth. Moses intervenes even though he still doesn’t believe the revelation.  Afterwards, Moses, his Egyptian adopted mother and sister are exiled to the desert.

Other scenes shown are his meeting of his future wife (played by Spanish actress Maria Valverde), the plague overtaking Egypt and Moses warning Rhamses to free the Jews before his first born is taken. The plague scenes were very gruesome with blood-filled rivers, dead fish, and frogs both alive and dead. 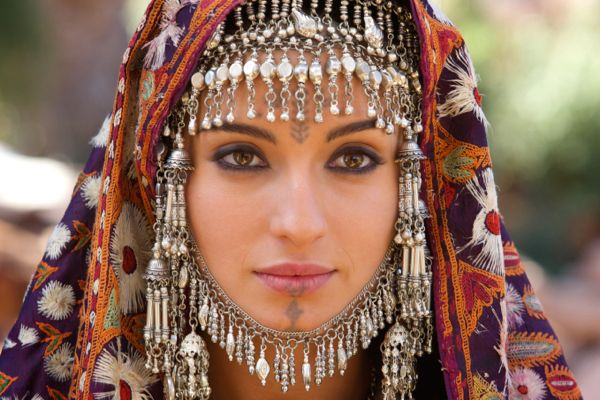 The final scene teases the famous parting of the red sea scene although we didn’t see the actual parting, and we cut off right before Rhamses and his army attack Moses and his followers as the sea heads back their way. Luckily there is no walking staff reminiscent of Charlton Heston’s Moses in the 10 Commandments.

While all of this sounds familiar, it's hard to do it justice just how riveting it is to watch it unfold on the big screen with great performance from Christian Bale as always and his on screen nemesis played by Edgerton. Aaron Paul and Ben Kingsley also brings gravitas to the Ridley Scott production. The retelling feels new and epic with a darker tone than previous versions, plus more drama between Rhamses and Moses' characters.

After the advance sneak peek of EXODUS: GODS AND KINGS, Christian Bale talked to Fandango’s Dave Karger about his preparation for the role of the iconic Biblical character. Of course he rewatched the most famous of the Moses movies with Charlton Heston in the 10 Commandments with this in mind. “You can’t out-Heston Charlton Heston,” he said. He also watched two other unlikely films that rounded out his study of the godly man - Mel Brooks History of the World: Part 1 and the Monty Python crew in Life of Brian (1979). He explains why Life of Brian was his first choice.

“The first thing I did after meeting with Ridley was rent “The Life of Brian” which is a favorite film of mine. Not only do I enjoy that film a great deal, anything where you are approaching it from a very ernest point of view can unintentionally become the “Life of Brian” quickly. So it was a guiding light throughout for me.”

He adds that he had “to get it out of your system” of the concept of Moses.

Bales also says he met with Ridley Scott about playing Moses after having shot American Hustle, and Scott was looking like he may have regretted that choice when he walked in with a bald head and belly. 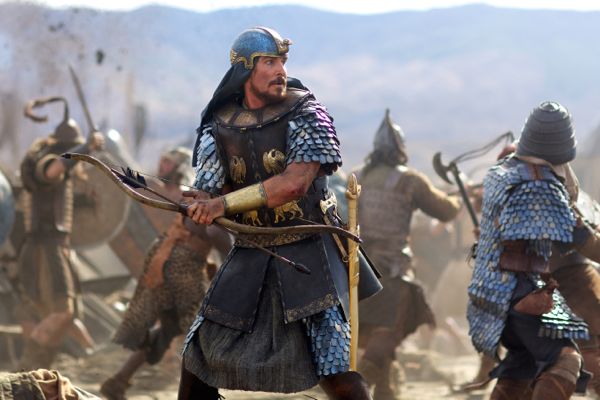 “When I got back from Boston, my head was absolutely shaved down to the scalp and I still had all of that girth. He really tried to not show the look of absolute horror at who he had cast, but the nicest thing he could say was ‘your hair is pretty short’ as he looked at me. I was thankful that I was in sort of these loose, tent-like clothes throughout - I was desperately trying to lose weight through. I didn’t think that would be fitting.”

Fortunately for his fans, Christian Bale looks nothing like his American Hustle character except for lots more facial hair as he descends into godly form in EXODUS: GODS AND KINGS.