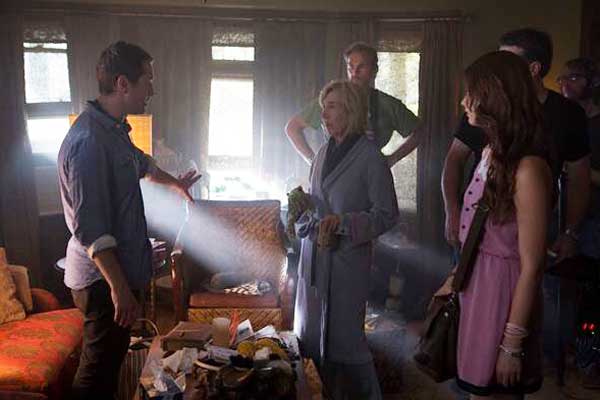 INSIDIOUS: CHAPTER 3 started production in Los Angeles Tuesday with Lin Shaye reprising her role as the ghost hunter, and adding Dermot Mulroney to the horror. The production is offering a lucky fan a visit to the set through a Facebook and Twitter contest.

Co-creator, writer and INSIDIOUS actor Leigh Whannell (pictured above) takes over for James Wan as director of the third movie in the franchise. In celebration of the new production, one fan can win a trip to Los Angeles for a visit to the set of INSIDIOUS: CHAPTER 3. Focus Features is running the sweepstakes on the movie's Twitter and Facebook pages for the movie. Hurry up because the sweepstakes ends July 25.

For more information, read the official press release below.

To commemorate the start of production of the series' newest chapter, Focus is launching a sweepstakes on the official Insidious Facebook (www.facebook.com/InsidiousMovie) and Twitter (www.twitter.com/InsidiousMovie) pages. Insidious buffs and fans will have the chance to win a trip for two to Los Angeles to visit the set of Insidious: Chapter 3. The contest begins on Tuesday, July 22nd, and ends on Friday, July 25th. The contest's complete official rules can be accessed at:
www.focusfeatures.com/article/insidious_set_visit.

Insidious: Chapter 3 stars Dermot Mulroney (of August: Osage County) and Stefanie Scott (of Blumhouse's upcoming Jem and the Holograms) alongside Lin Shaye, Angus Sampson, and Mr. Whannell, with the latter trio reprising their roles from the first two movies in the franchise.

In Insidious: Chapter 3, a twisted new tale of terror begins for a teenage girl and her family, predating the haunting of the Lambert family in the earlier movies and revealing more mysteries of the otherworldly realm The Further

Focus Features will release Insidious: Chapter 3 domestically nationwide on Friday, May 29th, 2015. eOne will distribute the picture in Canada, U.K., and Spain; and Sony will distribute the picture in the rest of the world. Jason Blum of Blumhouse, who produced both previous movies in the series, is producing the next installment with returning producer Oren Peli and franchise co-creator James Wan, who directed the two earlier films written by Mr. Whannell with story by Mr. Wan and Mr. Whannell. Brian Kavanaugh-Jones, Steven Schneider, Charles Layton, and Xavier Marchand are executive-producing Insidious: Chapter 3.