Gwyneth Paltrow finally gets some respect with her first character movie poster, but Pepper Potts isn’t looking too excited about it. Take a look at the full movie poster.

Gwyneth Paltrow reprises her role as Pepper Potts in IRON MAN 3, but the new movie poster has Pepper Potts mourning her beloved Tony Stark as she holds his cracked helmet.  While the trailers suggest Tony Stark/Iron Man may not be a match for the Mandarin, there is just no way it’s the end of Iron Man. After all, another Avengers movie is in the works.  So cheer up Pepper.  Or maybe she's down in the dumps because her poster was fifth in line after the Mandarin (Ben Kingsley), Don Cheadle's Iron Patriot, and Guy Pearce as Killian were unveiled.  She should have some seniority after all.  No respect, I tell ya!

The Pepper Potts movie poster is the latest character one-sheet to be released by Marvel and Disney.  The character posters for Guy Pearce, Ben Kingsley as the Mandarin,  Don Cheadle’s War Machine in the Iron Patriot all came before Pepper Potts.  The studio has been teasing the character IRON MAN 3 posters gradually with hopefully the big reveal of the Mandarin one-sheet coming up soon.  The Dark Knight Rises took a similar approach to the movie posters, hinting at the possible demise of the masked superhero with Bane towering over Batman's broken cowl. Marvel adapted that approach with several of their marketing campaigns leading us to believe Iron Man might have met his match too. 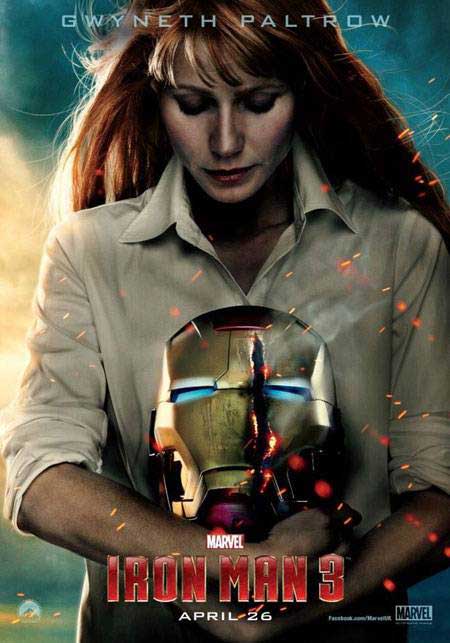