View Comments
Hit Girl and Kick Ass return for some more bad guy whopping in the follow up to the 2010 hit.  Chloë Grace Moretz is all grown up, and Hit Girl is cooler and tougher than ever.  Nicolas Cage’s Big Daddy may be gone, but Jim Carrey joins the cast as their ally Colonel Stars and Stripes.  Watch the red band trailer. 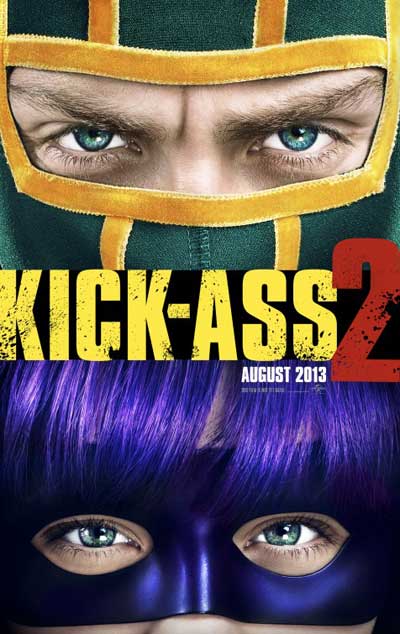 The first movie brought us some irreverence with the masked bandit superheroes and it seems from the new trailer that the spirit of the first one is in full force for KICK ASS 2.   Kick Ass director Matthew Vaughn (X-Men: First Class) did not opt to helm the sequel with duties going to a relatively unknown director Jeff Wadlow.

In the sequel, normal citizens step up and join Kick Ass to fight crime in a costume.  Everyone is hoping KICK ASS 2 will be just as entertaining as the first one but there are reservations that it will be nearly impossible to reproduce the originality of Kick Ass.  At least Hit-Girl is now taller and can beat up some serious booty with her new moves and cool purple motorcycle.  Aaron Taylor-Johnson also suits up once again as Kick Ass with new body armor while Red Mist played by Christopher Mintz-Plasse forgoes his old name for a new name – The Mother F****er to enact revenge on Kick Ass and Hit-Girl’s new good guy group.  We’re loving the Fu Manchu mustache with the dominatrix costume.

New heroes join the Kick Ass party on both sides with names such as Night Bitch, Doctor Gravity, Battle Guy, Black Death, The Tumor, Insect Name and of course the mother of them all – Colonel Stars and Stripes played by an almost unrecognizable Jim Carrey with a heavy Jersey accent.  During a recent interview with new cast member John Leguizamo, Leguizamo who plays Mint-Plasse’s bodyguard, revealed Jim Carrey plays mean very well.


“He’s being evil. And he’s doing a good job. I don’t know where he got that evil from, but he got that from somewhere.”

In the trailer, Jim Carrey’s masked vigilante commands his German Shepherd on a villain’s crotch in a hilarious scene.  We’re hoping he’ll bring some fun to the film along with everyone’s favorite superheroine – Hit-Girl.