View Comments
Demian Bichir lets loose as Mendez the Madman in Robert Rodriguez's MACHETE KILLS.  The Academy Award nominee is the latest character to get a movie poster for the sequel to Machete starring Danny Trejo. 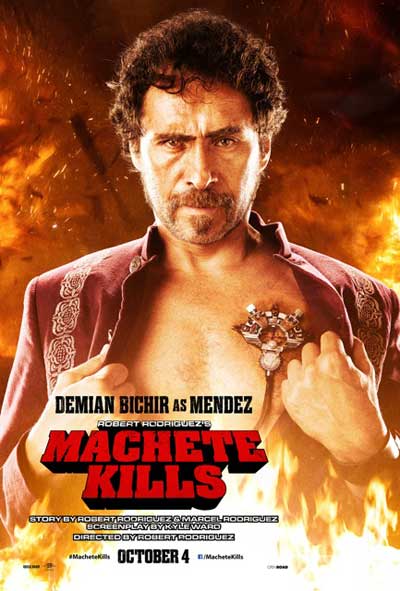 Demian (Savages, A Better Life) is featured on the movie one-sheet with some kind of device strapped to his heart.  He's no Iron Man, and his character name certainly suggest he's up to no good. In the trailer, we get a glimpse of the crazy character laughing maniacally.  He stars alongside a slew of Hollywood elite such as Michelle Rodriguez, Jessica Alba, Mel Gibson, Sofia Vergara, Amber Heard (The Rum Diary), Charlie Sheen, Alexa Vega, Antonio Banderas, Cuba Gooding Jr., and Lady Gaga.

In MACHETE KILLS, Danny Trejo returns as ex-Federale agent MACHETE, who is recruited by the President of the United States for a mission which would be impossible for any mortal man - he must take down a madman revolutionary and an eccentric billionaire arms dealer who have hatched a plan to spread war and anarchy across the planet.