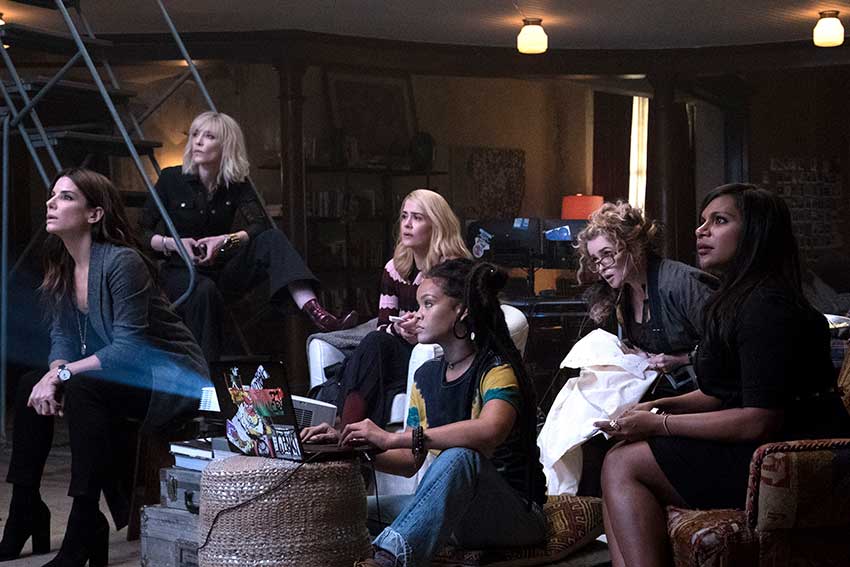 If you like your film plots to have sequels, trilogies, and remakes, the Ocean’s films tick all of those boxes and much more. From the original 1960 Ocean’s 11 (starring the Rat Pack) to the 2001 remake and its sequels (featuring George Clooney and Brad Pitt), this film series is a gift that just keeps on giving. So, after Steven Soderbergh stated that there would not be an Ocean’s Fourteen, Ocean’s fans were understandably left disappointed. While the films had gone out on a high note, they still had huge potential for a continuation of the storyline; but the death of Bernie Mac (who played Frank Catton in the Ocean’s trilogy) in 2008 meant that a fourth film from the franchise was unlikely. Then it was announced in October 2015 that a sequel to the Ocean’s Eleven trilogy was in the pipeline, but this time with a difference.

Following in the same vein as Ghostbusters (2016) and the upcoming female-led remake of Dirty Rotten Scoundrels, Warner Bros is rebooting the film series with a star-studded, all-female cast. Soderbergh is taking the films in a wholly new direction, one that appears to have all of the action and appeal of the 2001 series, but with an extra-huge helping of glamour and sass.

Fresh out of prison, Danny Ocean’s sister, Debbie Ocean (Sandra Bullock), assembles an all-star team to carry out the biggest heist of their lives. Whereas the 2001 films involved heists that took place in casinos, with the world-famous “teen idol poker scene” securing the film’s place in history as one of the best casino movies of all time, Ocean’s 8 is set to be a heist with a difference. Instead of a casino, Debbie Ocean and her gang of daring accomplices plan to steal a cool $150 million in diamonds from the neck of a world-famous actress (Anne Hathaway), who will be centre stage on the red carpet at the prestigious Met Gala. The plan is solid, with Sandra Bullock’s character spending the last five years, eight months, and twelve days in incarceration perfecting it; but the team will need to be on their best game to make sure that they get away with it.

Although Soderbergh directed the previous films, he returns as the producer on Ocean’s 8, with Gary Ross (the filmmaker behind The Hunger Games and Pleasantville) taking on the role as screenwriter and director. It will be interesting to see whether Ross will follow in Soderbergh’s footsteps by laying on throwback visual aesthetics and a dry sense of humour, but one thing is for sure: with a cast this strong, it is bound to be a box office success.

The roles appear to be similar to those of the 2001 Ocean’s Eleven cast, with Cate Blanchett starring as the Brad Pitt to Sandra Bullock’s George Clooney. Awkwafina stars as a gifted street pick-pocket, while Rhianna plays a computer hacker named Nine-Ball and Sarah Paulson takes on the role of a suburban housewife who needs some convincing to return to her life of crime. Helena Bonham Carter brings her quirky sense of style to the role of a stylist, while Mindy Kaling provides jewellery expertise.

With cameo appearances expected from Kim Kardashian, Kendall Jenner, Serena Williams, Zayn Malik, Anna Wintour, James Corden, and Katie Holmes, the filmmakers will be using the red carpet setting to full effect. After the first trailer hit screens in December 2017—offering a tiny glimpse of what Ocean’s fans can look forward to in the summer of 2018—a more recent two-minute trailer has since been released that gives a much more detailed look into where the film is heading.
Opening in theatres on June 8th, the all-star cast, daring plot, and glamorous cameos mean that Ocean’s 8 is set to be the biggest and best heist film of the year. Don’t miss it!