A fourth trailer for Marvel's THE AVENGERS premiered on iTunes Wednesday with new footage and action scenes that should wet audience's appetite making this the biggest film of the year. In addition the new THE AVENGERS movie poster debuted a day earlier with mixed reactions. 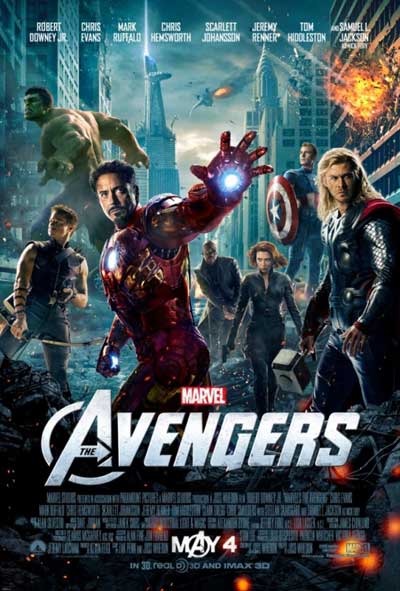 In the new two-and-a-half minute trailer its non-stop action with the multitude of superhereos to choose from in fighting form.  The new preview also reveals more inter-fighting among the Avengers with a quick scene with Iron Man taking on Captain America.  in previous trailers, we see Thor battling with Captain America.  Is this a practice drill for the superheroes or are they really taking each other on?  It must be a superhero boot camp.

In the latest Marvel preview, no Avenger is left out in the battle scenes with every superhero flexing his muscle against the invasion led by Thor's evil brother Loki.  i don't know about you but  this trailer definitely got the goose bumps going.  The movie poster also mimics the new trailer with scenes from the battle zones and Avengers scattered about with top billing going to Iron Man Robert Downey, Jr.

In THE AVENGERS, directed by Joss Whedon, Nick Fury and the international agency S.H.I.E.L.D. brings together super human crime fighters Iron Man, Thor, Captain America, Hawkeye, Black Widow and Bruce Banner to help save Earth from Loki and his invading army. THE AVENGERS stars Robert Downey Jr., Chris Evans, Mark Ruffalo, Chris Hemsworth, Scarlett Johansson, Jeremy Renner and Samuel L. Jackson, and directed by Joss Whedon.  Marvel's THE AVENGERS is based on the ever-popular Marvel comic book series "The Avengers," first published in 1963 and a comics institution ever since.

What do you think about the new trailer and poster?