'The Host' New Movie Poster and Trailer- Rate It

Stephenie Meyer's Twilight Saga movie franchise comes to an end when it opens November 16, but her other novel comes to the big screen with THE HOST.   Starring another heroine played by Saoirse Ronan, THE HOST movie poster and trailer are conveniently revealed to coincide with Breaking Dawn Part 2's release.

From sparkly vampires to body snatchers, the world has been taken over by aliens who invade human bodies with hosts.  Melanie Stryder (Ronan) is one of the few humans free of the body snatchers, and falling in love with another unaffected human (Max Irons).  That is until she avoids capture by falling to her death.  The evil aliens inject a host in her dead body, and brings her back to life  with no memory of her past as a human.  Her memories overpower her host and she sets out to free the humans.


While the new poster for THE HOST suggest a love triangle with two hotties (Irons, Jake Abel), there is no hint of it in the trailer.  Stephenie Meyer has a thing for colored eyes.  Humans with a host are identifiable by their glowing eyes, which means the poor actors had to endure wearing the cumbersome contacts to achieve the look much like they did in the Twilight movies.

Directed by Andrew Niccol, Diane Kruger and William Hurt also star in THE HOST which is set for release March 29, 2013. 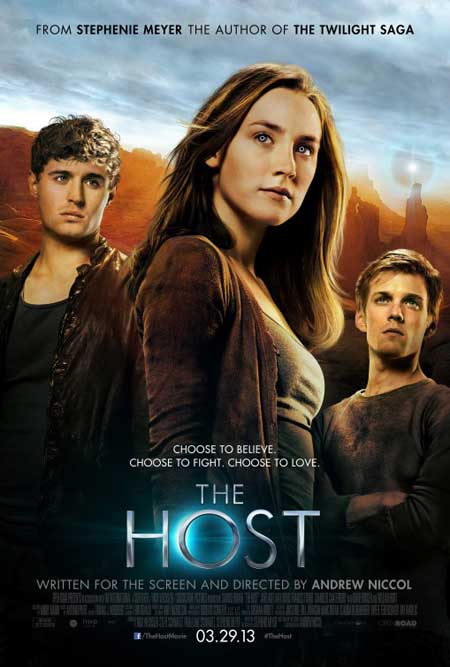 THE HOST Trailer
blog comments powered by DISQUS back to top