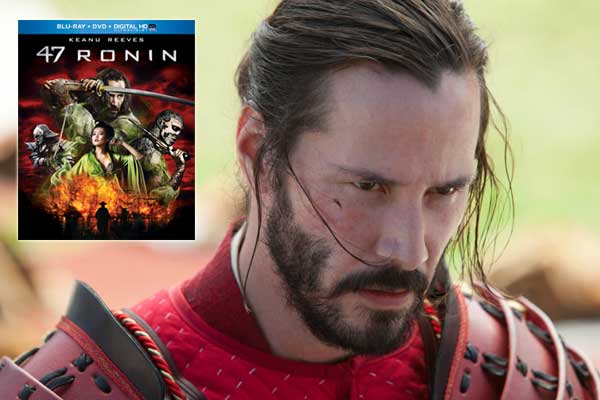 Keanu Reeves stars in a reimagining of one of Japan’s timeless tales, 47 RONIN, available now in stores on Blu-ray/DVD Combo Packs.  Based on an epic story, this extraordinary tale of inspiring courage has its origins in the early 18th century. After a treacherous warlord kills their master and banishes their kind, 47 leaderless samurai vow to seek vengeance and reclaim their honor. Transformed into a thrilling, visually stunning 3D film by director Carl Rinsch, 47 Ronin tells the story of a small group of warriors, or ronin, on a quest to avenge the death of their master. Battling across a savage world of mythical beasts, shape-shifting witches and wondrous terrors, the ronin must seek help from kai (Reeves), an enslaved half-breed they once rejected – in their ultimate fight for redemption. Watch Trailer

For a chance to win a 47 RONIN Blu-ray/DVD Combo, click on the form below.

PROMOTION DESCRIPTION:  47 RONIN Blu-ray/DVD Combo (“Sweepstakes”) begins on or about April 1, 2014 at 6:00 p.m. Eastern Time ("ET") and ends on April 12, 2014 at 11:59 p.m. ET (the “Sweepstakes Period”).  At the end of the Sweepstakes Period, a random drawing will be conducBAD GRANDPA to select winners from among all eligible entries received, as more fully set forth in the OFFICIAL RULES.  Entry in the Sweepstakes does not constitute entry into any other promotion, contest or sweepstakes.  By participating in the Sweepstakes, each entrant unconditionally accepts and agrees to comply with and abide by these Official Rules and the decisions of CineMovie TV, 2700 Arlington Ave. Ste. 101 Torrance, CA  90501 (“Sponsor”), which shall be final and binding in all respects.