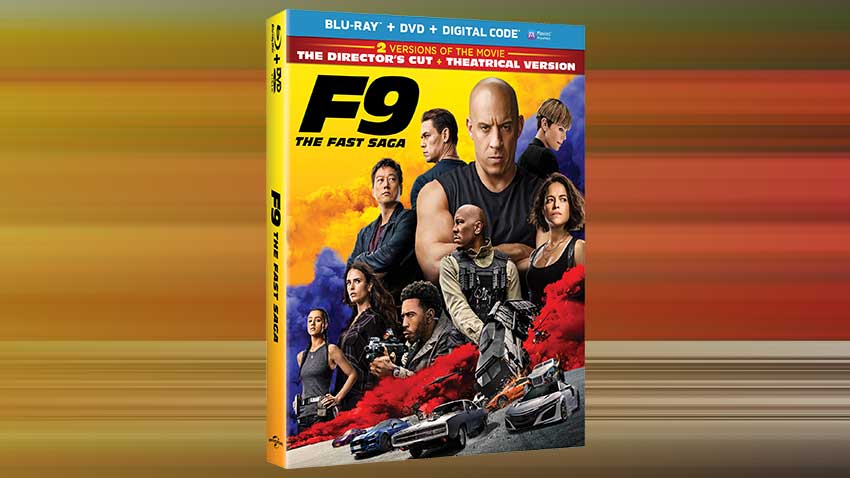 F9 EXTENDED DIRECTOR’S CUT is now available on 4K UHD, Blu-ray & DVD, and CineMovie has 5 digital codes to giveaway. Read on to enter.

The Fast family returns in the latest adrenaline-charged installment with a never-before-seen Director’s Cut of F9. The blockbuster film has generated more than $600 million worldwide and now fans can own the global box-office phenomenon that features “unbelievable, jaw-dropping action” (io9) on Digital September 7, 2021 and on 4K Ultra HD, Blu-ray™ and DVD on September 21, 2021 from Universal Pictures Home Entertainment. Featuring the original theatrical release, the Director’s Cut and more than an hour of exclusive bonus content – including a behind-the-scenes look at the gravity-defying stunts and nitro-charged cars, a gag reel and even more justice for Han – fans can now add F9 to their collection to watch again and again!

F9 Director Justin Lin On What's Next In the Fast Saga

PROMOTION DESCRIPTION: THE PROTEGE Movie Prize Pack Giveaway (“Sweepstakes”) begins on or about September 21, 2021at 6:00 p.m. Eastern Time ("ET") and ends on September 28, 2021 at 11:59 p.m. ET (the “Sweepstakes Period”).  At the end of the Sweepstakes Period, a random drawing will be conducted to select winners from among all eligible entries received, as more fully set forth in the OFFICIAL RULES.  Entry in the Sweepstakes does not constitute entry into any other promotion, contest or sweepstakes.  By participating in the Sweepstakes, each entrant unconditionally accepts and agrees to comply with and abide by these Official Rules and the decisions of CineMovie TV, 2700 Arlington Ave. Ste. 101 Torrance, CA  90501 (“Sponsor”), which shall be final and binding in all respects.

THE PROTEGE Prize Pack Giveaway Sweepstakes is intended for participation only in the United States of America and shall be construed according to, and governed exclusively by, California law.  Do not participate in the Sweepstakes if you are not a legal resident of the United States physically located in the country on or about September 21, 2021or do not fall within the eligibility requirements set forth in the Official Rules below.

PROMOTION DESCRIPTION:  THE PROTEGE Prize Pack Giveaway (“Sweepstakes”) begins on or about September 21, 2021 at 6:00 p.m. Eastern Time ("ET") and ends on September 28, 2021 at 11:59 p.m. ET (the "Sweepstakes Period").  At the end of the Sweepstakes Period, a random drawing will be conducted to select Blu-ray Combo Pack winners from among all eligible entries received, as more fully set forth below.

WINNER'S LIST/OFFICIAL RULES:  To obtain a copy of any legally-required winner's list, send a self-addressed stamped envelope to: THE PROTEGEPrize Pack Giveaway Sweepstakes Winner's List, 2700 Arlington Ave. Ste. 101 Torrance, CA 90501.  All such requests must be received no later than six (6) weeks after the end of the Sweepstakes Period.  These Official Rules are available by sending an e-mail request to CineMovie.TV. This email address is being protected from spam bots, you need Javascript enabled to view it with "Official Rules Request" in the subject line.  Official Rules requests will not be granted after the end of the Sweepstakes Period.