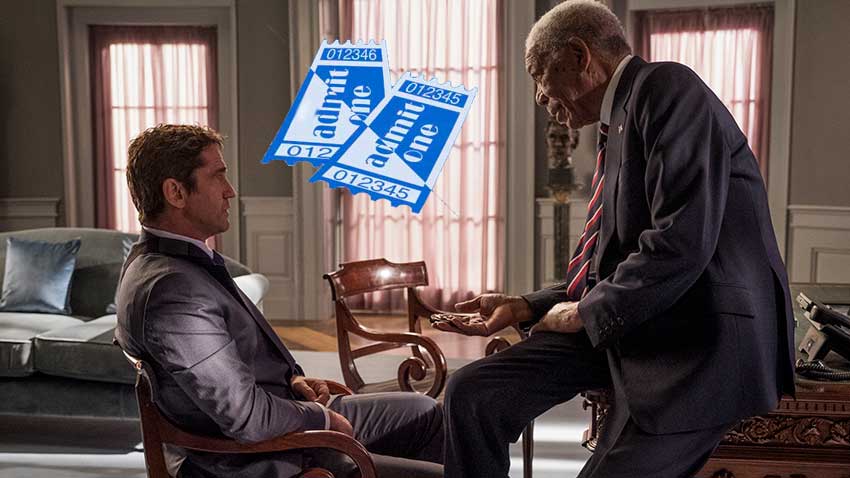 Gerard Butler returns to save the United States President. This time Morgan Freeman is POTUS in ANGEL HAS FALLEN, and CineMovie has advance movie tickets in Los Angeles. Read on to find out how to download your free tickets.

When there is an assassination attempt on U.S. President Allan Trumbull (Morgan Freeman), his trusted confidant, Secret Service Agent Mike Banning (Gerard Butler), is wrongfully accused and taken into custody. After escaping from capture, he becomes a man on the run and must evade his own agency and outsmart the FBI in order to find the real threat to the President. Desperate to uncover the truth, Banning turns to unlikely allies to help clear his name, keep his family from harm and save the country from imminent danger.

PROMOTION DESCRIPTION: ANGEL HAS FALLEN Ticket Giveaway (“Sweepstakes”) begins on or about August 13, 2019 at 6:0 p.m. Eastern Time ("ET") and ends on August 20, 2019 (or while supplies last) at 11:59 p.m. ET (the “Sweepstakes Period”) or as long as tickets last.  At the end of the Sweepstakes Period, a random drawing will be conducted to select winners from among all eligible entries received, as more fully set forth in the OFFICIAL RULES.  Entry in the Sweepstakes does not constitute entry into any other promotion, contest or sweepstakes.  By participating in the Sweepstakes, each entrant unconditionally accepts and agrees to comply with and abide by these Official Rules and the decisions of CineMovie TV, 2700 Arlington Ave. Ste. 101 Torrance, CA  90501 (“Sponsor”), which shall be final and binding in all respects.