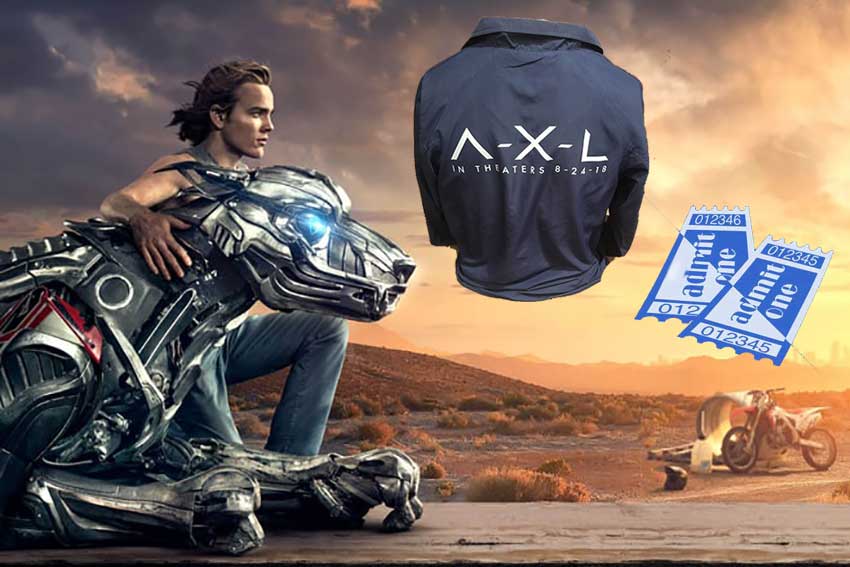 On August 24, the story of a boy and his dog takes a twist when man's best friend is a robotic four-legged friend in A.X.L. To celebrate the relase, CineMovie is giving away an A.X.L. movie jacket to a grand prize winner and movie passes to the runner ups. Read on to find out how to win.

A.X.L. is a top-secret, robotic dog created by the military to help protect tomorrow’s soldiers. Code named by the scientists who created him, A.X.L. stands for Attack, Exploration, Logistics, and embodies the most advanced, next-generation artificial intelligence. After an experiment gone wrong, A.X.L. is discovered hiding alone in the desert by a kind-hearted outsider named Miles (Alex Neustaedter), who finds a way to connect with him after activating his owner-pairing technology. Together, the two develop a special friendship based on trust, loyalty and compassion. Helping Miles gain the confidence he’s been lacking, A.X.L. will go to any length to protect his new companion, including facing off against the scientists who created him and who will do anything to get him back. Knowing what is at stake if A.X.L. is captured, Miles teams up with a smart, resourceful ally named Sara (Becky G) to help him protect his new best friend on a timeless, epic adventure for the whole family.

To enter the A.X.L. Movie Giveaway, click on the form below.

PROMOTION DESCRIPTION:  A.X.L. Movie Giveaway (“Sweepstakes”) begins on or about August 18, 2018 at 6:00 p.m. Eastern Time ("ET") and ends on August 24, 2018 at 11:59 p.m. ET (the “Sweepstakes Period”).  At the end of the Sweepstakes Period, a random drawing will be conducted to select winners from among all eligible entries received, as more fully set forth in the OFFICIAL RULES.  Entry in the Sweepstakes does not constitute entry into any other promotion, contest or sweepstakes.  By participating in the Sweepstakes, each entrant unconditionally accepts and agrees to comply with and abide by these Official Rules and the decisions of CineMovie TV, 2700 Arlington Ave. Ste. 101 Torrance, CA  90501 (“Sponsor”), which shall be final and binding in all respects.

A.X.L. Movie Sweepstakes is intended for participation only in the United States of America and shall be construed according to, and governed exclusively by, California law.  Do not participate in the Sweepstakes if you are not a legal resident of the United States physically located in the country on or about August 17, 2018, or do not fall within the eligibility requirements set forth in the Official Rules below.

PROMOTION DESCRIPTION:  A.X.L. Movie (“Sweepstakes”) begins on or about August 17, 2018 at 6:00 p.m. Eastern Time ("ET") and ends on August 24, 2018 at 11:59 p.m. ET (the "Sweepstakes Period").  At the end of the Sweepstakes Period, a random drawing will be conducted to select DVD winners from among all eligible entries received, as more fully set forth below.

Total ARV of all prizing combined is Seventy-three Dollars (73.00) (USD).

WINNER'S LIST/OFFICIAL RULES:  To obtain a copy of any legally-required winner's list, send a self-addressed stamped envelope to: A.X.L. Movie Sweepstakes Winner's List, 2700 Arlington Ave. Ste. 101 Torrance, CA 90501.  All such requests must be received no later than six (6) weeks after the end of the Sweepstakes Period.  These Official Rules are available by sending an e-mail request to CineMovie.TV. This email address is being protected from spam bots, you need Javascript enabled to view it with "Official Rules Request" in the subject line.  Official Rules requests will not be granted after the end of the Sweepstakes Period.