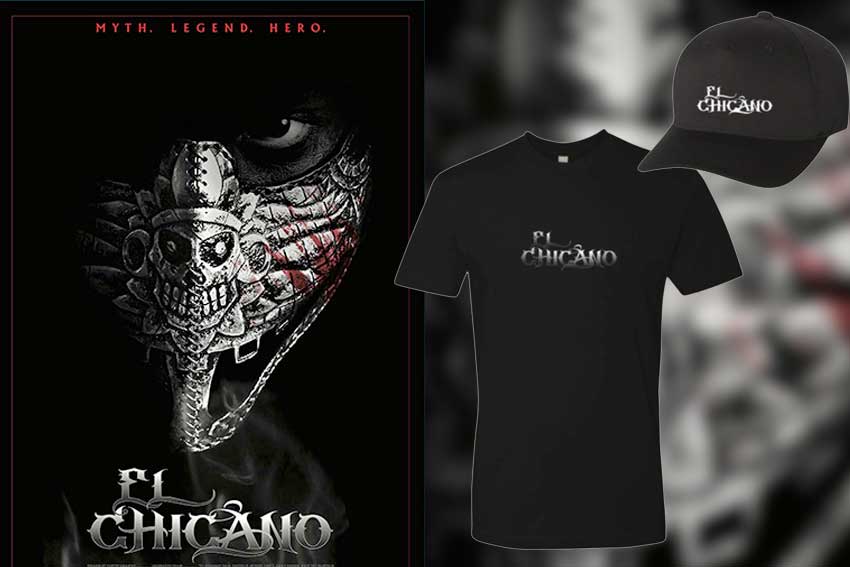 The first Latino superhero comes to the big screen in EL CHICANO starring Raul Castillo as the masked vigilante, “Lucifer’s” Aimee Garcia and George Lopez. To celebrate the movie’s release May 3, we’re giving away an EL CHICANO prize pack which includes a hat, t-shirt and movie poster. Read on to enter.

When L.A.P.D. Detective Diego Hernandez is assigned a career-making case investigating a vicious cartel, he uncovers links to his brother's supposed suicide and a turf battle that's about to swallow his neighborhood. Torn between playing by the book and seeking justice, he resurrects the masked street legend. Now, out to take down his childhood buddy turned gang boss, he sets off a bloody war to defend his city and avenge his brother's murder EL CHICANO opens May 3 in movie theaters.

Enter by clicking below.

PROMOTION DESCRIPTION: EL CHICANO Movie Prize Pack Giveaway (“Sweepstakes”) begins on or about October 30, 2017 at 6:00 p.m. Eastern Time ("ET") and ends on April 25, 2019 at 11:59 p.m. ET (the “Sweepstakes Period”).  At the end of the Sweepstakes Period, a random drawing will be conducted to select winners from among all eligible entries received, as more fully set forth in the OFFICIAL RULES.  Entry in the Sweepstakes does not constitute entry into any other promotion, contest or sweepstakes.  By participating in the Sweepstakes, each entrant unconditionally accepts and agrees to comply with and abide by these Official Rules and the decisions of CineMovie TV, 2700 Arlington Ave. Ste. 101 Torrance, CA  90501 (“Sponsor”), which shall be final and binding in all respects.

EL CHICANO Prize Pack Giveaway Sweepstakes is intended for participation only in the United States of America and shall be construed according to, and governed exclusively by, California law.  Do not participate in the Sweepstakes if you are not a legal resident of the United States physically located in the country on or about October 30, 2017 or do not fall within the eligibility requirements set forth in the Official Rules below.

PROMOTION DESCRIPTION:  EL CHICANO Prize Pack Giveaway (“Sweepstakes”) begins on or about October 30, 2017, 2016 at 6:00 p.m. Eastern Time ("ET") and ends on April 25, 2019 at 11:59 p.m. ET (the "Sweepstakes Period").  At the end of the Sweepstakes Period, a random drawing will be conducted to select Blu-ray Combo Pack winners from among all eligible entries received, as more fully set forth below.

WINNER'S LIST/OFFICIAL RULES:  To obtain a copy of any legally-required winner's list, send a self-addressed stamped envelope to: EL CHICANOPrize Pack Giveaway Sweepstakes Winner's List, 2700 Arlington Ave. Ste. 101 Torrance, CA 90501.  All such requests must be received no later than six (6) weeks after the end of the Sweepstakes Period.  These Official Rules are available by sending an e-mail request to CineMovie.TV. This email address is being protected from spam bots, you need Javascript enabled to view it with "Official Rules Request" in the subject line.  Official Rules requests will not be granted after the end of the Sweepstakes Period.