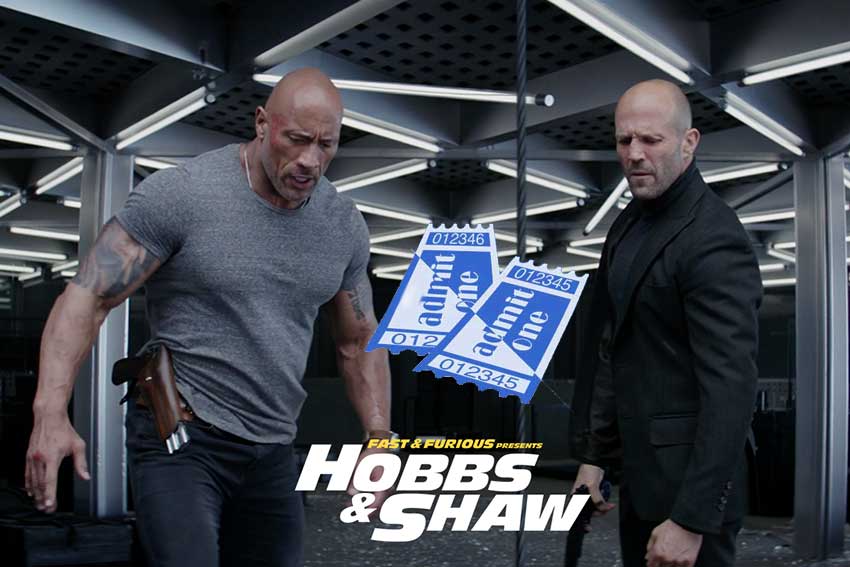 Jason Statham, Dwayne Johnson and Idris Elba star in FAST & FURIOUS PRESENTS: HOBBS & SHAW and it promises to be action-packed. We've got advance movie tickets to watch the action flick, Tuesday, July 30 for 15 winners and a guest. Sign up below for your chance at winning.

Ever since hulking lawman Hobbs (Dwayne Johnson), a loyal agent of America's Diplomatic Security Service, and lawless outcast Shaw (Jason Statham), a former British military elite operative, first faced off in 2015’s FURIOUS 7, the duo have swapped smack talk and body blows as they’ve tried to take each other down. But when cyber-genetically enhanced anarchist Brixton (Idris Elba) gains control of an insidious bio-threat that could alter humanity forever — and bests a brilliant and fearless rogue MI6 agent (Vanessa Kirby), who just happens to be Shaw’s sister — these two sworn enemies will have to partner up to bring down the only guy who might be badder than themselves.

PROMOTION DESCRIPTION: FAST& FURIOUS PRESENTS: HOBBS & SHAW Ticket Giveaway (“Sweepstakes”) begins on or about July 18, 2019 at 6:0 p.m. Eastern Time ("ET") and ends on July 28, 2019 at 11:59 p.m. ET (the “Sweepstakes Period”) or as long as tickets last.  At the end of the Sweepstakes Period, a random drawing will be conducted to select winners from among all eligible entries received, as more fully set forth in the OFFICIAL RULES.  Entry in the Sweepstakes does not constitute entry into any other promotion, contest or sweepstakes.  By participating in the Sweepstakes, each entrant unconditionally accepts and agrees to comply with and abide by these Official Rules and the decisions of CineMovie TV, 2700 Arlington Ave. Ste. 101 Torrance, CA  90501 (“Sponsor”), which shall be final and binding in all respects.