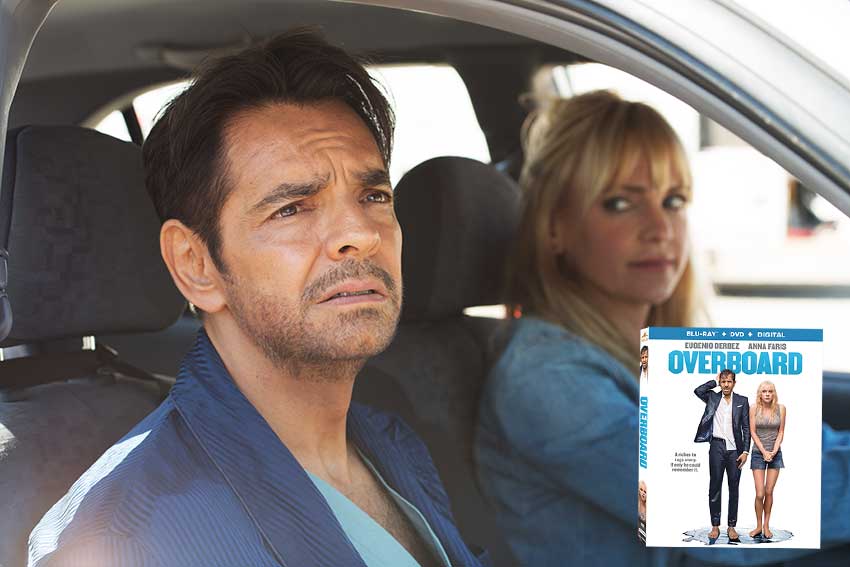 OVERBOARD, the hilarious comedy starring Anna Faris and Eugenio Derbez, splashes onto Digital July 17 and Blu-ray™ Combo Pack and DVD on July 31, and CineMovie has 3 copies of the new release for our winners.

From Metro Goldwyn Mayer Pictures (MGM) and Pantelion Films, Eugenio Derbez (How to Be a Latin Lover, Instructions Not Included), Anna Faris (The House Bunny, TV’s “Mom”),  and Golden Globe® nominee Eva Longoria (Best Actress, TV’s “Desperate Housewives,” 2006) star in this hilarious fresh take on the iconic romantic comedy. Directed by three-time Primetime Emmy® award winner Rob Greenberg (Jigsaw, Predestination), who teamed up to write the screenplay with Bob Fisher (Wedding Crashers, We’re the Millers) and Leslie Dixon based on Dixon’s story, Overboard reverses the roles from the original film, featuring Derbez as a spoiled wealthy yacht owner who becomes the target of revenge from his mistreated employee played by Faris.

To enter the OVERBOARD DVD Giveaway, click on the form below.

PROMOTION DESCRIPTION:  OVERBOARD DVD Giveaway (“Sweepstakes”) begins on or about July 17, 2018 at 6:00 p.m. Eastern Time ("ET") and ends on July 31, 2018 at 11:59 p.m. ET (the “Sweepstakes Period”).  At the end of the Sweepstakes Period, a random drawing will be conducted to select winners from among all eligible entries received, as more fully set forth in the OFFICIAL RULES.  Entry in the Sweepstakes does not constitute entry into any other promotion, contest or sweepstakes.  By participating in the Sweepstakes, each entrant unconditionally accepts and agrees to comply with and abide by these Official Rules and the decisions of CineMovie TV, 2700 Arlington Ave. Ste. 101 Torrance, CA  90501 (“Sponsor”), which shall be final and binding in all respects.