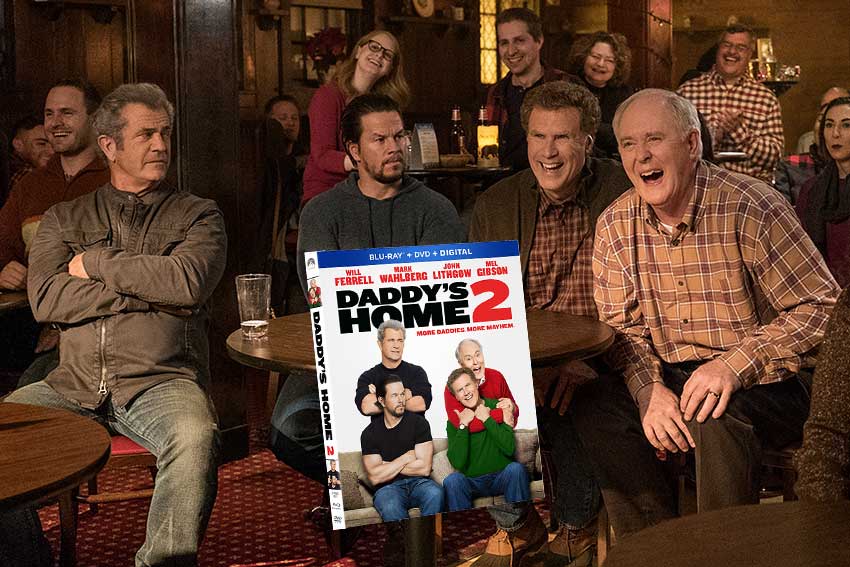 When it comes to raising their kids, Dusty (Mark Wahlberg) and Brad (Will Ferrell) finally have this co-parenting thing down. That is, until Dusty’s macho dad (Mel Gibson) and Brad’s sweet-natured father (John Lithgow) come to town, throwing the whole family into complete chaos. As old rivalries create new problems, Dusty and Brad’s partnership is put to the ultimate test in this hilarious and heartwarming comedy that gives new meaning to the term ‘blended family.’

The DADDY’S HOME 2 4K Ultra HD Combo Pack and Blu-ray Combo Pack feature over 45 minutes of bonus content. Go behind the scenes with five featurettes, deleted/ extended/alternate scenes and a hilarious gag reel. Plus, for a limited time only, get a bonus digital copy of the original Daddy’s Home with the 4K Ultra HD & Blu-ray Combo Packs. In addition, the DADDY’S HOME 2 Blu-ray and 4K Ultra HD discs boast a Dolby Atmos® soundtrack remixed specifically for the home theater environment to place and move audio anywhere in the room, including overhead and the 4K Ultra HD disc features Dolby Vision™ high dynamic range (HDR), which delivers greater brightness and contrast, as well as a fuller palette of rich colors.

To enter the DADDY’S HOME 2 DVD Giveaway, click on the form below.

PROMOTION DESCRIPTION:  DADDY’S HOME 2 DVD Giveaway (“Sweepstakes”) begins on or about February 11, 2018 at 6:00 p.m. Eastern Time ("ET") and ends on February 24, 2018 at 11:59 p.m. ET (the “Sweepstakes Period”).  At the end of the Sweepstakes Period, a random drawing will be conducted to select winners from among all eligible entries received, as more fully set forth in the OFFICIAL RULES.  Entry in the Sweepstakes does not constitute entry into any other promotion, contest or sweepstakes.  By participating in the Sweepstakes, each entrant unconditionally accepts and agrees to comply with and abide by these Official Rules and the decisions of CineMovie TV, 2700 Arlington Ave. Ste. 101 Torrance, CA  90501 (“Sponsor”), which shall be final and binding in all respects.