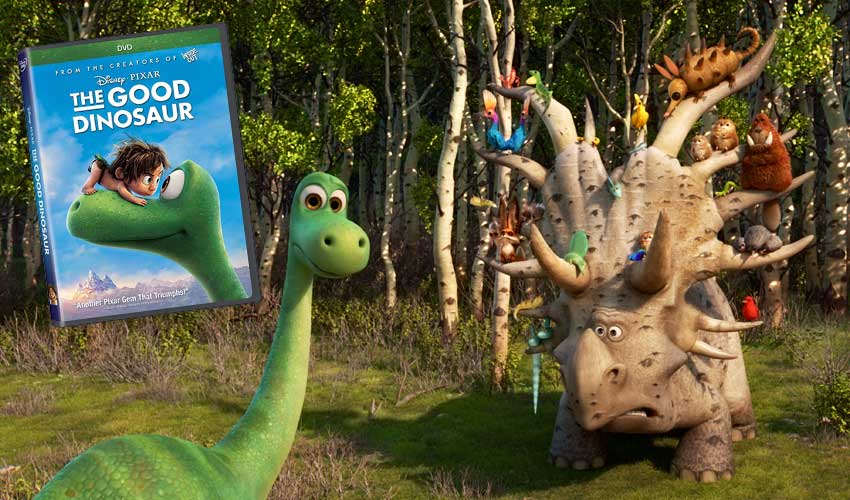 Disney*Pixar’s THE GOOD DINOSAUR is coming to Blu-ray™ Combo Pack, Digital HD and Disney Movies Anywhere February 23 and CineMovie has three DVD copies to giveaway to three winners. Read on to find out how to enter CineMovie's THE GOOD DINOSAUR DVD giveaway.

The heartwarming adventure between a dinosaur and a human cave boy is a perfect adventure for the whole family, and along with the extensive bonus features comes the Academy Award© Nominated Theatrical Short “Sanjay’s Super Team.

The Good Dinosaur asks the question: What if the asteroid that forever changed life on Earth missed the planet completely, and giant dinosaurs never became extinct? In this epic journey into the world of dinosaurs, an apatosaurus named Arlo makes an unlikely human friend. While traveling through a harsh and mysterious landscape, Arlo learns the power of confronting his fears and discovers what he is truly capable of. Watch Trailer

For a chance to win a THE GOOD DINOSAUR DVD, click on the form below.

PROMOTION DESCRIPTION:  THE GOOD DINOSAUR DVD (“Sweepstakes”) begins on or about February 19, 2016 at 6:00 p.m. Eastern Time ("ET") and ends on February 26, 2016 at 11:59 p.m. ET (the “Sweepstakes Period”).  At the end of the Sweepstakes Period, a random drawing will be conducted to select winners from among all eligible entries received, as more fully set forth in the OFFICIAL RULES.  Entry in the Sweepstakes does not constitute entry into any other promotion, contest or sweepstakes.  By participating in the Sweepstakes, each entrant unconditionally accepts and agrees to comply with and abide by these Official Rules and the decisions of CineMovie TV, 2700 Arlington Ave. Ste. 101 Torrance, CA  90501 (“Sponsor”), which shall be final and binding in all respects.