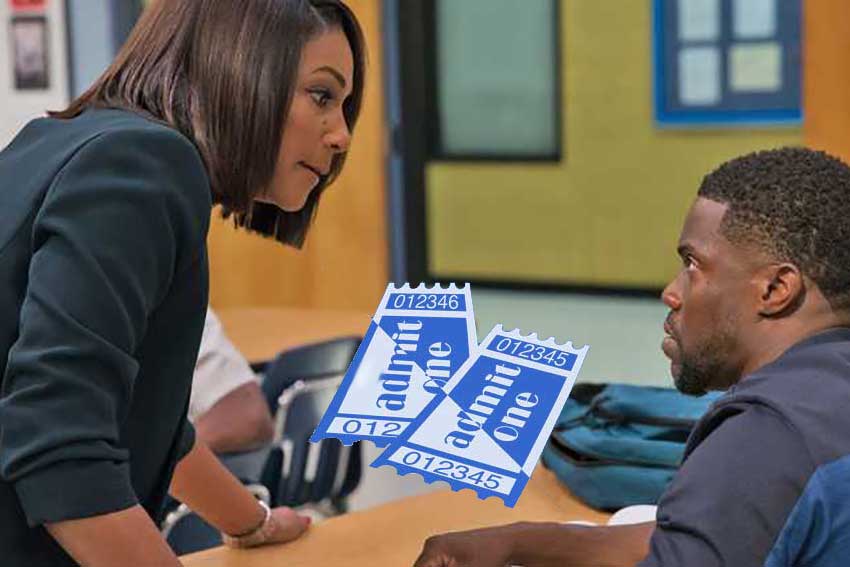 Kevin Hart and Tiffany Haddish team up in NIGHT SCHOOL, and CineMovie has advance movie passes to watch the comedy in 9 cities nationwide. Read on to find out how to print your tickets (first-come, first-serve).

Star Kevin Hart and producer Will Packer, who partnered for the hit RIDE ALONG and THINK LIKE A MAN series, bring their signature style to NIGHT SCHOOL. The comedy from director Malcolm D. Lee (GIRLS TRIP) follows a group of misfits who are forced to attend adult classes in the longshot chance they’ll pass the GED exam.

To enter NIGHT SCHOOL Ticket Giveaway, click on the form below

PROMOTION DESCRIPTION: NIGHT SCHOOL Ticket Giveaway (“Sweepstakes”) begins on or about September 11, 2018 at 6:00 p.m. Eastern Time ("ET") and ends on September 25, 2018 at 11:59 p.m. ET (the “Sweepstakes Period”) or as long as tickets last.  At the end of the Sweepstakes Period, a random drawing will be conducted to select winners from among all eligible entries received, as more fully set forth in the OFFICIAL RULES.  Entry in the Sweepstakes does not constitute entry into any other promotion, contest or sweepstakes.  By participating in the Sweepstakes, each entrant unconditionally accepts and agrees to comply with and abide by these Official Rules and the decisions of CineMovie TV, 2700 Arlington Ave. Ste. 101 Torrance, CA  90501 (“Sponsor”), which shall be final and binding in all respects.