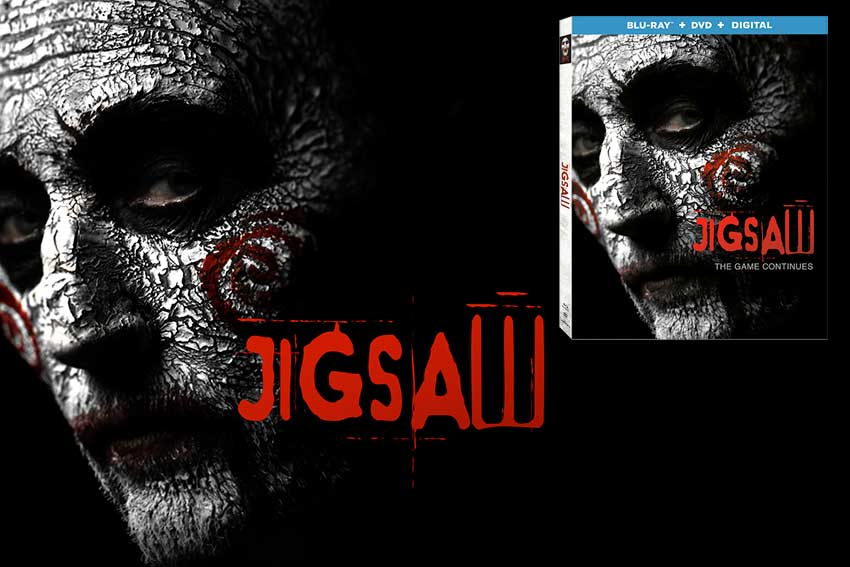 JIGSAW is now available for Digital viewing and it will arrive on 4K Ultra HD (plus Blu-ray and Digital), Blu-ray Combo Pack (plus DVD and Digital), DVD, and On Demand January 23. CineMovie has 3 JIGSAW DVD's to giveaway to some lucky winners. Read on to find out how to enter to win.

In the latest terrifying installment of the legendary SAW series, law enforcement find itself chasing the ghost of a man dead for over a decade, embroiled in a diabolical new game that’s only just begun. Has John Kramer, the infamous Jigsaw Killer, returned from the dead to commit a series of murders and remind the world to be grateful for the gift of life? Or is this a trap set by a different killer with designs of their own?

Immerse yourself within Jigsaw’s world with the release’s extensive Special Features, including an all-new 7-Part Documentary, an Audio Commentary with Producers Mark Burg, Oren Koules, and Peter Block, and “The Choice is Yours: Exploring the Props” featurette. The 4K Ultra HD and Blu-ray versions feature Dolby Atmos [1] audio mixed specifically for the home, to place and move audio anywhere in the room, including overhead. The 4K Ultra HD Blu-ray also features Dolby Vision [2] high dynamic range (HDR), growing Lionsgate’s library of titles featuring both Dolby Vision and Dolby Atmos. Dolby Vision transforms the TV experience in the home by delivering greater brightness and contrast, as well as a fuller palette of rich colors. Together with the captivating sound of Dolby Atmos, consumers will experience both cutting-edge imaging and state-of-the-art sound technology for a fully immersive entertainment experience.

To enter the JIGSAW DVD Giveaway, click on the form below.

PROMOTION DESCRIPTION:  JIGSAW DVD Giveaway (“Sweepstakes”) begins on or about January 18, 2018 at 6:00 p.m. Eastern Time ("ET") and ends on January 26, 2018 at 11:59 p.m. ET (the “Sweepstakes Period”).  At the end of the Sweepstakes Period, a random drawing will be conducted to select winners from among all eligible entries received, as more fully set forth in the OFFICIAL RULES.  Entry in the Sweepstakes does not constitute entry into any other promotion, contest or sweepstakes.  By participating in the Sweepstakes, each entrant unconditionally accepts and agrees to comply with and abide by these Official Rules and the decisions of CineMovie TV, 2700 Arlington Ave. Ste. 101 Torrance, CA  90501 (“Sponsor”), which shall be final and binding in all respects.

JIGSAW DVD Sweepstakes is intended for participation only in the United States of America and shall be construed according to, and governed exclusively by, California law.  Do not participate in the Sweepstakes if you are not a legal resident of the United States physically located in the country on or  about January 18, 2018, or do not fall within the eligibility requirements set forth in the Official Rules below.

PROMOTION DESCRIPTION:  JIGSAW DVD (“Sweepstakes”) begins on or about January 18, 2018 at 6:00 p.m. Eastern Time ("ET") and ends on January 26, 2018 at 11:59 p.m. ET (the "Sweepstakes Period").  At the end of the Sweepstakes Period, a random drawing will be conducted to select DVD winners from among all eligible entries received, as more fully set forth below.

WINNER'S LIST/OFFICIAL RULES:  To obtain a copy of any legally-required winner's list, send a self-addressed stamped envelope to: JIGSAW DVD Sweepstakes Winner's List, 2700 Arlington Ave. Ste. 101 Torrance, CA 90501.  All such requests must be received no later than six (6) weeks after the end of the Sweepstakes Period.  These Official Rules are available by sending an e-mail request to CineMovie.TV. This email address is being protected from spam bots, you need Javascript enabled to view it with "Official Rules Request" in the subject line.  Official Rules requests will not be granted after the end of the Sweepstakes Period.