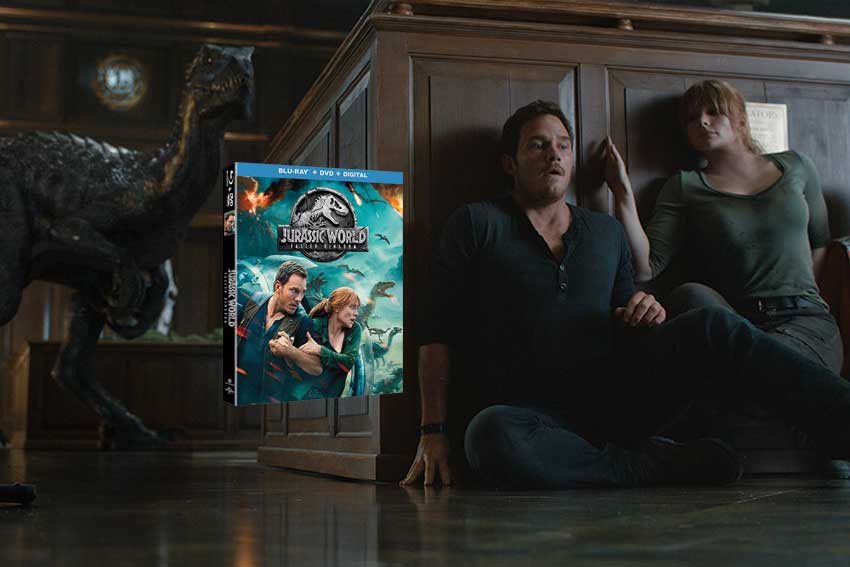 JURASSIC WORLD: FALLEN KINGDOM arrived on Digital and via the digital movie app MOVIES ANYWHERE on September 4, 2018, as well as on 4K Ultra HD, 3D Blu-rayTM, Blu-rayTM, DVD and On Demand September 18. CineMovie has 5 copies of the DVD to giveaway. Read on to find out how to win a copy.

Building on the wonder and adventure that has mesmerized audiences worldwide, Jurassic World: Fallen Kingdomcontinues one of the most thrilling series in movie history with an adventure 65 million years in the making, captivating audiences of all ages with a stunning new chapter filled and more dinosaurs than any other Jurassicfilm. Stars Chris Pratt (Jurassic World, Guardians of the Galaxy franchise) and Bryce Dallas Howard (Jurassic World, Pete’s Dragon) return as Owen Grady and Claire Dearing with original cast members Jeff Goldblum (Jurassic Park,Thor: Ragnarok) and BD Wong (Jurassic World, “Law and Order: SVU”) reprising their iconic roles. Bring home the non-stop adventure, learn the incredible twist, and find out what happens when the park is gone.

To enter the JURASSIC WORLD: FALLEN KINGDOM DVD Giveaway, click on the form below.

PROMOTION DESCRIPTION: JURASSIC WORLD: FALLEN KINGDOM DVD Giveaway (“Sweepstakes”) begins on or about September 19, 2018 at 6:00 p.m. Eastern Time ("ET") and ends on September 26, 2018 at 11:59 p.m. ET (the “Sweepstakes Period”).  At the end of the Sweepstakes Period, a random drawing will be conducted to select winners from among all eligible entries received, as more fully set forth in the OFFICIAL RULES.  Entry in the Sweepstakes does not constitute entry into any other promotion, contest or sweepstakes.  By participating in the Sweepstakes, each entrant unconditionally accepts and agrees to comply with and abide by these Official Rules and the decisions of CineMovie TV, 2700 Arlington Ave. Ste. 101 Torrance, CA  90501 (“Sponsor”), which shall be final and binding in all respects.