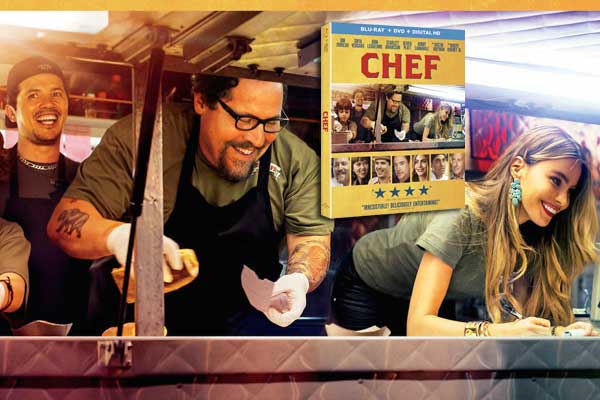 Jon Favreau's CHEF comes to Blu-ray and DVD September 30th, and CineMovie has a few copies of CHEF to giveaway. Read on to find out how to enter.

An online feud with an influential food critic (Oliver Platt) and a creative disagreement with his investor (Dustin Hoffman) convince Carl Casper (Jon Favreau) to hang up his apron at a posh Los Angeles bistro and get his mojo back in Miami’s Cuban-inspired cuisine. When his ex-wife (Sofia Vergara) helps him get a fresh start with a rundown food truck, Carl and his best friend and sous chef Martin (John Leguizamo) head across the country with Carl’s young son Percy on a culinary adventure that helps Carl rediscover what matters in life.

For a chance to win a CHEF Blu-ray/DVD Combo Pack, click on the form below.

PROMOTION DESCRIPTION:  CHEF Blu-ray/DVD Combo (“Sweepstakes”) begins on or about September 29, 2014 at 6:00 p.m. Eastern Time ("ET") and ends on October 12, 2014 at 11:59 p.m. ET (the “Sweepstakes Period”).  At the end of the Sweepstakes Period, a random drawing will be conducted to select winners from among all eligible entries received, as more fully set forth in the OFFICIAL RULES.  Entry in the Sweepstakes does not constitute entry into any other promotion, contest or sweepstakes.  By participating in the Sweepstakes, each entrant unconditionally accepts and agrees to comply with and abide by these Official Rules and the decisions of CineMovie TV, 2700 Arlington Ave. Ste. 101 Torrance, CA  90501 (“Sponsor”), which shall be final and binding in all respects.