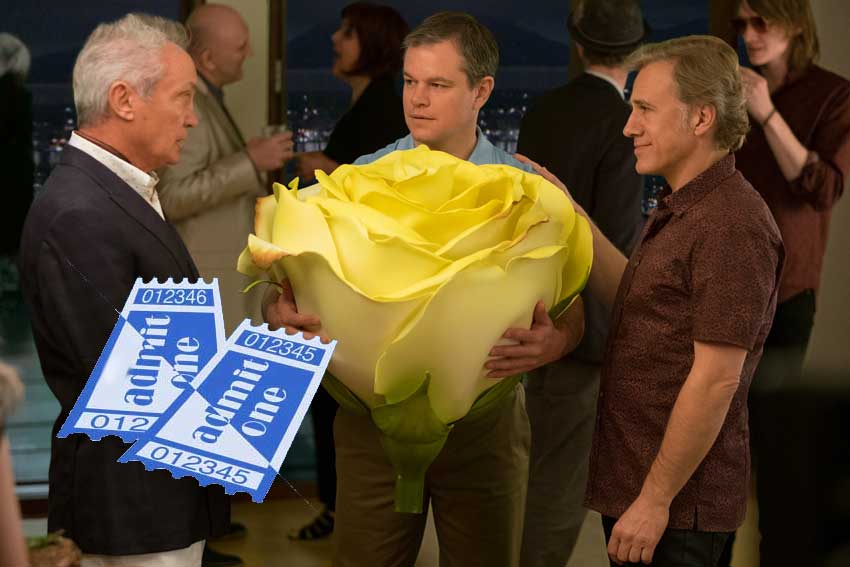 DOWNSIZING imagines what might happen if, as a solution to over-population, Norwegian scientists discover how to shrink humans to five inches tall and propose a 200-year global transition from big to small. People soon realize how much further money goes in a miniaturized world, and with the promise of a better life, everyman Paul Safranek (Matt Damon) and wife Audrey (Kristen Wiig) decide to abandon their stressed lives in Omaha in order tDownsizingo get small and move to a new downsized community — a choice that triggers life-changing adventures.

DOWNSIZING is in theaters December 22.

To enter DOWNSIZING Ticket Giveaway, click on the form below.

PROMOTION DESCRIPTION: DOWNSIZING Ticket Giveaway (“Sweepstakes”) begins on or about December 12, 2017 at 6:00 p.m. Eastern Time ("ET") and ends on December 19, 2017 at 11:59 p.m. ET (the “Sweepstakes Period”) or as long as tickets last.  At the end of the Sweepstakes Period, a random drawing will be conducted to select winners from among all eligible entries received, as more fully set forth in the OFFICIAL RULES.  Entry in the Sweepstakes does not constitute entry into any other promotion, contest or sweepstakes.  By participating in the Sweepstakes, each entrant unconditionally accepts and agrees to comply with and abide by these Official Rules and the decisions of CineMovie TV, 2700 Arlington Ave. Ste. 101 Torrance, CA  90501 (“Sponsor”), which shall be final and binding in all respects.