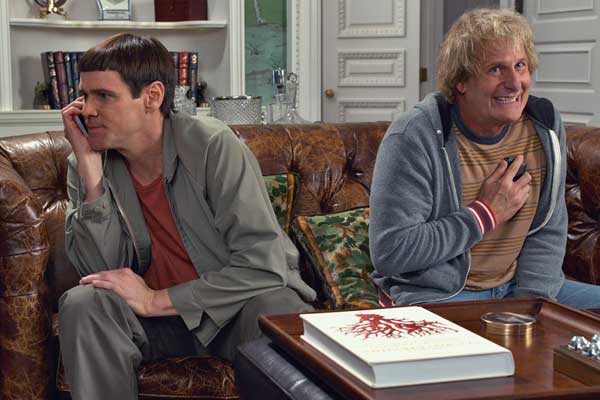 Jim Carrey and Jeff Daniels are back as Harry and Lloyd in DUMB AND DUMBER TO, and CineMovie has your advance movie tickets to the 20-year reunion in 10 cities nationwide. Read on to find out how you can win guaranteed seating to DUMB AND DUMBER TOO.

Jim Carrey and Jeff Daniels reprise their signature roles as Lloyd and Harry in the sequel to the smash hit that took the physical comedy and kicked it in the nuts:  Dumb and Dumber To.  The original film’s directors, Peter and Bobby Farrelly, take Lloyd and Harry on a road trip to find a child Harry never knew he had and the responsibility neither should ever, ever be given. Watch Trailer

DUMB AND DUMBER TO opens November 14.

To enter DUMB AND DUMBER TO Movie Ticket Giveaway, click on the Entry Form below.

PROMOTION DESCRIPTION: DUMB AND DUMBER TO Giveaway (“Sweepstakes”) begins on or about November 3, 2014 2013 at 6:00 p.m. Eastern Time ("ET") and ends on November 10, 2014 at 11:59 p.m. ET (the “Sweepstakes Period”).  At the end of the Sweepstakes Period, a random drawing will be conducted to select winners from among all eligible entries received, as more fully set forth in the OFFICIAL RULES.  Entry in the Sweepstakes does not constitute entry into any other promotion, contest or sweepstakes.  By participating in the Sweepstakes, each entrant unconditionally accepts and agrees to comply with and abide by these Official Rules and the decisions of CineMovie TV, 2700 Arlington Ave. Ste. 101 Torrance, CA  90501 (“Sponsor”), which shall be final and binding in all respects.