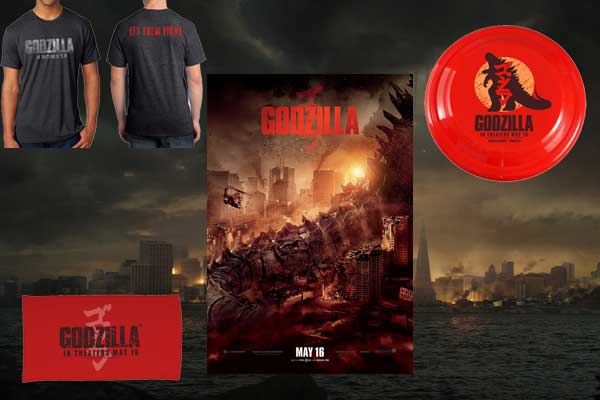 CineMovie has the Godzilla of movie prize packs with your chance to win a GODZILLA “Summer Pack” which includes a movie poster, beach towel, flyer, t-shirt and Hollywood Movie Money to see the film. Read on for your chance at winning.

In Summer 2014, the world’s most revered monster is reborn as Warner Bros. Pictures and Legendary Pictures unleash the epic action adventure “Godzilla.” From visionary new director Gareth Edwards (“Monsters”) comes a powerful story of human courage and reconciliation in the face of titanic forces of nature, when the awe-inspiring Godzilla rises to restore balance as humanity stands defenseless. Watch Trailer.

To enter the GODZILLA "Summer Pack" Sweepstakes, click on the Entry Form below and your answer to the following question by watching the trailer.

In GODZILLA, this actor, who originally hails from the United Kingdom, stars as Ford Brody. His breakout role was as the young John Lennon in the 2009 film "Nowhere Boy".  He also starred as the title role in "Kick-Ass" and "Kick-Ass 2." Name the actor.

PROMOTION DESCRIPTION: GODZILLA "Summer Pack" Giveaway (“Sweepstakes”) begins on or about May 5, 2014 at 6:00 p.m. Eastern Time ("ET") and ends on May 18, 2014 at 11:59 p.m. ET (the “Sweepstakes Period”).  At the end of the Sweepstakes Period, a random drawing will be conducted to select winners from among all eligible entries received, as more fully set forth in the OFFICIAL RULES.  Entry in the Sweepstakes does not constitute entry into any other promotion, contest or sweepstakes.  By participating in the Sweepstakes, each entrant unconditionally accepts and agrees to comply with and abide by these Official Rules and the decisions of CineMovie TV, 2700 Arlington Ave. Ste. 101 Torrance, CA  90501 (“Sponsor”), which shall be final and binding in all respects.