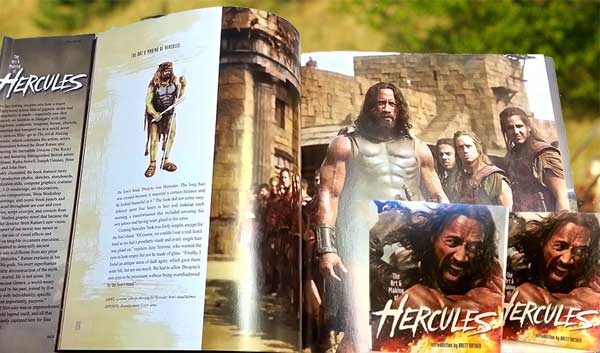 Dwayne Johnson stars in HERCULES and we're giving three winners the chance to win an official "The Art & Making of Hercules" illustrated book by sending us your best selfie of a Hercules battle face.

On July 25, Dwayne Johnson hits the big screen as Hercules for a film based on the hero from the Radical Comics. In the official synopsis for the movie, the action flick is referred to as a "revisionist take on the classic myth, HERCULES." The epic action film stars Ian McShane, Rufus Sewell, Joseph Fiennes, Peter Mullan and John Hurt.

For a chance to win a HERCULES Movie Book Giveaway, click on the form below and submit your Hercules selfie.

PROMOTION DESCRIPTION:  NON-STOP Blu-ray/DVD Combo (“Sweepstakes”) begins on or about July 20, 2014 at 6:00 p.m. Eastern Time ("ET") and ends on July 29, 2014 at 11:59 p.m. ET (the “Sweepstakes Period”).  At the end of the Sweepstakes Period, a random drawing will be conducted to select winners from among all eligible entries received, as more fully set forth in the OFFICIAL RULES.  Entry in the Sweepstakes does not constitute entry into any other promotion, contest or sweepstakes.  By participating in the Sweepstakes, each entrant unconditionally accepts and agrees to comply with and abide by these Official Rules and the decisions of CineMovie TV, 2700 Arlington Ave. Ste. 101 Torrance, CA  90501 (“Sponsor”), which shall be final and binding in all respects.

HERCULES Movie Book Sweepstakes is intended for participation only in the United States of America and shall be construed according to, and governed exclusively by, California law.  Do not participate in the Sweepstakes if you are not a legal resident of the United States physically located in the country on or  about July 19, or do not fall within the eligibility requirements set forth in the Official Rules below.

PROMOTION DESCRIPTION:  NON-STOP Blu-ray/DVD Combo (“Sweepstakes”) begins on or about July 19, 2014 at 6:00 p.m. Eastern Time ("ET") and ends on July 29, 2014 at 11:59 p.m. ET (the "Sweepstakes Period").  At the end of the Sweepstakes Period, a random drawing will be conducted to select Blu-ray Combo Pack winners from among all eligible entries received, as more fully set forth below.

ELIGIBILITY: The prizes are only open to legal U.S. residents who are eighteen (18) years of age or older and shall be construed according to, and governed exclusively by, United States law.  Do not participate in the Sweepstakes if you are not a legal resident of the United States physically located in the Los Angeles, CA area, on or about July 19, or do not fall within the eligibility requirements set forth in the Official Rules.  All submissions become property of CineMovie.TV.  All federal, state, and local laws and regulations apply.  Any taxes due are the responsibility of the winner.  Void where prohibited or restricNON-STOP Blu-ray/DVD Combo by law.

PRIZES/ODDS:  Three winners will each receive one (1) Book. ARV is Twenty-nine Dollars and ninety-nine cents ($29.99) (USD).

Total ARV of all prizing combined is Eighty-Nine Dollars with ninety-seven cents. ($89.97) (USD).

WINNER'S LIST/OFFICIAL RULES:  To obtain a copy of any legally-required winner's list, send a self-addressed stamped envelope to: NON-STOP Blu-ray/DVD Combo Sweepstakes Winner's List, 2700 Arlington Ave. Ste. 101 Torrance, CA 90501.  All such requests must be received no later than six (6) weeks after the end of the Sweepstakes Period.  These Official Rules are available by sending an e-mail request to CineMovie.TV. This email address is being protected from spam bots, you need Javascript enabled to view it with "Official Rules Request" in the subject line.  Official Rules requests will not be granted after the end of the Sweepstakes Period.