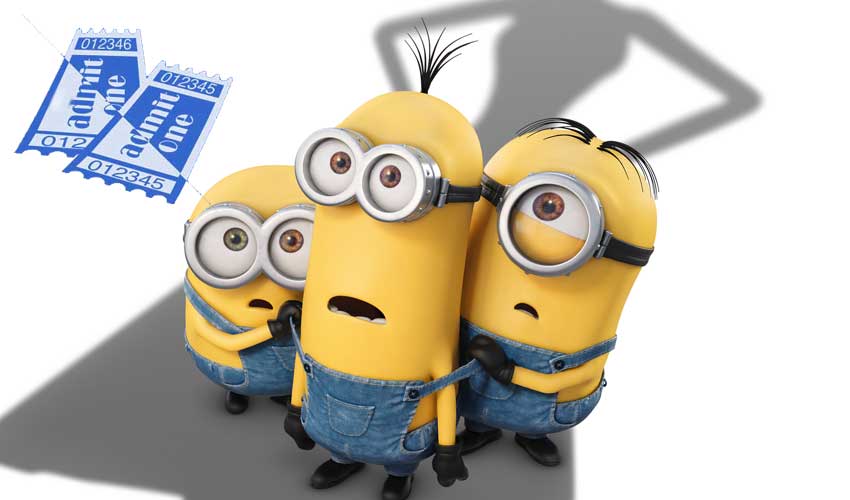 The Minions return in their own movie, and CineMovie has VIP tickets to giveaway in 10 cities nationwide including Miami, Chicago, LA, NYC, Houston and other cities. Read on to find out how you can enter the MINIONS VIP Ticket Giveaway.

The story of Universal Pictures and Illumination Entertainment’s Minions begins at the dawn of time. Starting as single-celled yellow organisms, Minions evolve through the ages, perpetually serving the most despicable of masters. After accidentally killing off so many of them—from T. rex to Napoleon—the Minions find themselves without a master to serve and fall into a deep depression.   But one Minion named Kevin has a plan, and he—alongside teenage rebel Stuart and lovable little Bob—ventures out into the world to find a new evil boss for his brethren to follow.   The trio embarks upon an adventure that ultimately leads them to their next potential master, Scarlet Overkill (Academy Award® winner Sandra Bullock), the world’s first-ever female super-villain. They travel from frigid Antarctica to 1960s New York City, ending in mod London, where they must face their biggest challenge to date: saving all of Minionkind...from annihilation. Watch trailer

To enter the MINIONS Ticket Giveaway Giveaway, click on the form below.

PROMOTION DESCRIPTION:  MINIONS Ticket Giveaway Giveaway (“Sweepstakes”) begins on or about July 1, 2015 at 6:00 p.m. Eastern Time ("ET") and ends on July 7, 2015 at 11:59 p.m. ET (the “Sweepstakes Period”).  At the end of the Sweepstakes Period, a random drawing will be conducted to select winners from among all eligible entries received, as more fully set forth in the OFFICIAL RULES.  Entry in the Sweepstakes does not constitute entry into any other promotion, contest or sweepstakes.  By participating in the Sweepstakes, each entrant unconditionally accepts and agrees to comply with and abide by these Official Rules and the decisions of CineMovie TV, 2700 Arlington Ave. Ste. 101 Torrance, CA  90501 (“Sponsor”), which shall be final and binding in all respects.