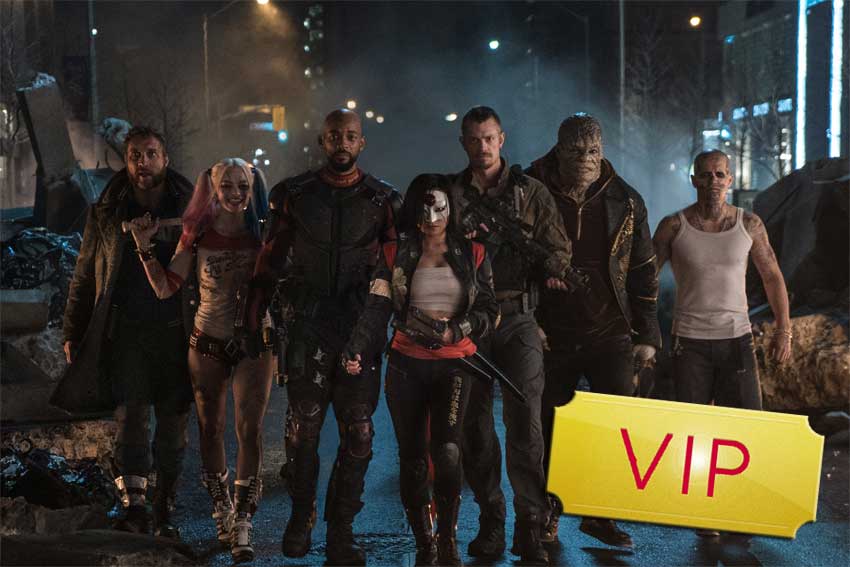 CineMovie has your chance to walk the red carpet at the New York City premiere of SUICIDE SQUAD, and watch the movie with Will Smith, Jared Leto, Margot Robbie, Viola Davis, Joel Kinnaman, Cara Delevingne,  Jai Courtney and the rest of the squad. Read on to find out how to enter.

It feels good to be bad… Assemble a team of the world’s most dangerous, incarcerated Super Villains, provide them with the most powerful arsenal at the government’s disposal, and send them off on a mission to defeat an enigmatic, insuperable entity. U.S. intelligence officer Amanda Waller has determined only a secretly convened group of disparate, despicable individuals with next to nothing to lose will do. However, once they realize they weren’t picked to succeed but chosen for their patent culpability when they inevitably fail, will the Suicide Squad resolve to die trying, or decide it’s every man for himself?

To enter the SUICIDE SQUAD Ticket Giveaway, click on the form below.

NO PURCHASE NECESSARY. WINNER MUST RESIDE IN THE NYC AREA

PROMOTION DESCRIPTION:  SUICIDE SQUAD Ticket Giveaway (“Sweepstakes”) begins on or about July 25, 2016 at 6:00 p.m. Eastern Time ("ET") and ends on July 28, 2016 at 11:59 p.m. ET (the “Sweepstakes Period”).  At the end of the Sweepstakes Period, a random drawing will be conducted to select winners from among all eligible entries received, as more fully set forth in the OFFICIAL RULES.  Entry in the Sweepstakes does not constitute entry into any other promotion, contest or sweepstakes.  By participating in the Sweepstakes, each entrant unconditionally accepts and agrees to comply with and abide by these Official Rules and the decisions of CineMovie TV, 2700 Arlington Ave. Ste. 101 Torrance, CA  90501 (“Sponsor”), which shall be final and binding in all respects.