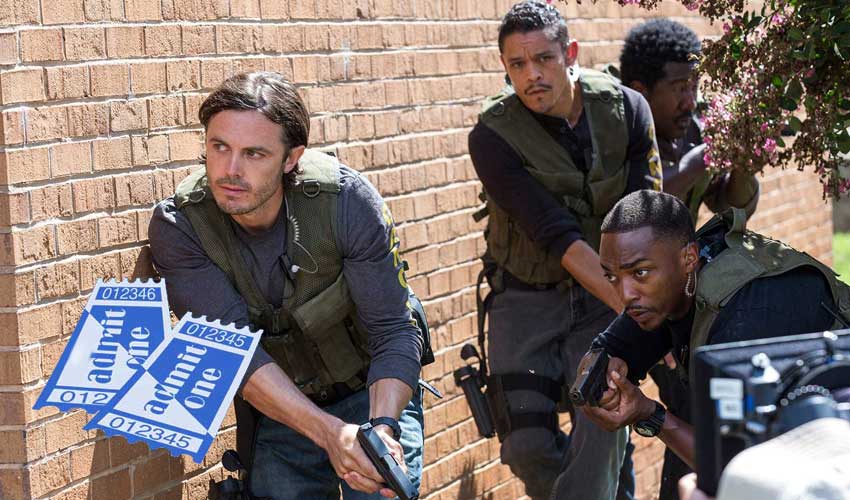 Watch Casey Affleck, Woody Harrelson, Aaron Paul, Kate Winslet, Gal Gadot and Chiwetel Ejiofor in an advance screening of the action thriller TRIPLE 9 in 10 cities nationwide. Read on to find out how to enter the TRIPLE 9 10-City TIcket Giveaway.

In TRIPLE 9, a crew of dirty cops is blackmailed by the Russian mob to execute a virtually impossible heist and the only way to pull it off is to manufacture a 999, police code for "officer down." Their plan is turned upside down when the unsuspecting rookie they set up to die foils the attack, triggering a breakneck action-packed finale tangled with double-crosses, greed and revenge.

To enter the TRIPLE 9 Ticket Giveaway, click on the form below.

PROMOTION DESCRIPTION:  TRIPLE 9 Ticket Giveaway (“Sweepstakes”) begins on or about February 17 at 6:00 p.m. Eastern Time ("ET") and ends on February 23, 2016 at 11:59 p.m. ET (the “Sweepstakes Period”).  At the end of the Sweepstakes Period, a random drawing will be conducted to select winners from among all eligible entries received, as more fully set forth in the OFFICIAL RULES.  Entry in the Sweepstakes does not constitute entry into any other promotion, contest or sweepstakes.  By participating in the Sweepstakes, each entrant unconditionally accepts and agrees to comply with and abide by these Official Rules and the decisions of CineMovie TV, 2700 Arlington Ave. Ste. 101 Torrance, CA  90501 (“Sponsor”), which shall be final and binding in all respects.