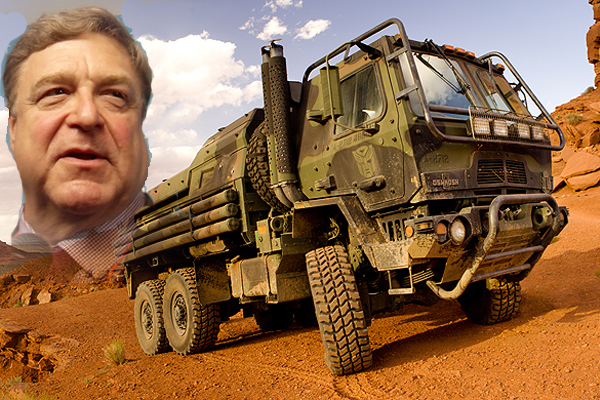 Famous faces will be lending their voices to the new Michael Bay Transformers movie with John Goodman and Ken Watanabe joining TRANSFORMERS: AGE OF EXTINCTION as new Autobots. 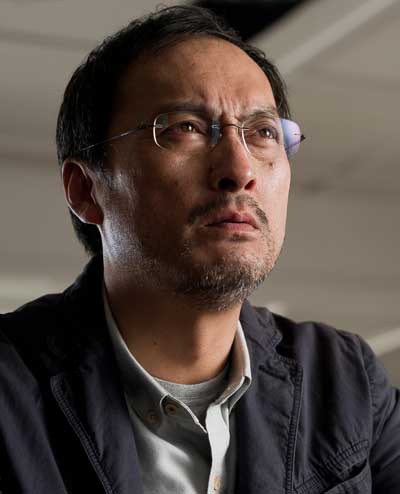 The fourth film in the Transformers movie franchise opens June 27, but new voices are still being added in post production with the announcement of actors John Goodman and Ken Watanabe (Godzilla) joining the cast as voices of the transforming robots. John Goodman will play Autobound Hound, a Tactical Vehicle that obviously transforms into a giant robot.  Ken Watanabe, who can next be seen in the new Godzillaopening May 19, will fight on the same side as Drift. Paramount Pictures has yet to release an image of the new character.

Goodman and Watanabe join other Autobots voiced by Peter Cullen and Frank Welker who reprise their roles in the new Transformers movie with Welker also playing a new character named Galvatron.

Other new voice actors were also announced as new characters. For more about the casting, read the official announcement below.

HOLLYWOOD, CA (May 8, 2014) – Director Michael Bay has tapped John Goodman and Ken Watanabe to voice two all new Autobots in his highly anticipated film “TRANSFORMERS: AGE OF EXTINCTION,” the fourth film in the global blockbuster franchise from Paramount Pictures.

Goodman will play Autobot Hound, Watanabe will play Drift, while Cullen reprises his role as the voice of Optimus Prime, and Welker takes on another new character, Galvatron.

“I am pleased to welcome two gifted and versatile actors, John Goodman and Ken Watanabe, to the world of Transformers,” said Bay. “And to reteam with Peter and Frank, who have brought Transformers characters alive from the beginning. I've been fortunate to work with some of the best voice talent in the business, and together we will introduce several exciting new robots to fans of the franchise around the world.”

Rounding out the voice-over cast are actors John DiMaggio, Mark Ryan, Robert Foxworth and Reno Wilson.  DiMaggio and Ryan will take on the new characters Crosshairs and Lockdown respectively, while Foxworth reprises the role of Ratchet and Wilson returns as Brains.

“TRANSFORMERS: AGE OF EXTINCTION” begins after an epic battle that left a great city torn, but with the world saved. As humanity picks up the pieces, a shadowy group reveals itself in an attempt to control the direction of history… while an ancient, powerful new menace sets Earth in its crosshairs. With help from a new cast of humans, Optimus Prime and the Autobots rise to meet their most fearsome challenge yet. In an incredible adventure, they are swept up in a war of good and evil, ultimately leading to a climactic battle across the world.

Peter Cullen is known throughout the world as the voice of the leader of the Autobots, Optimus Prime, on the popular 1980s cartoon series “The Transformers” and in Michael Bay’s “TRANSFORMERS” film franchise. Additionally, he has voiced the robots Ironhide, Slugslinger, Streetwise, Wingspan and Nightstick. He has lent his voice to “Winnie the Pooh’s” Eeyore on everything from cartoons and television commercials to theatrical promotions. His film credits include the voice of the title role in the remake of “KING KONG,” and the inhuman alien sounds in “PREDATOR.”

Frank Welker has voiced many recurring characters in “The Transformers” animated series, including eight of the original 14 Decepticons, Megatron, Galvatron, Soundwave, Skywrap, Laserbeak, Rumble, Frenzy, Ravage and Ratbat. On the big screen, he appeared as Soundwave and Ravage in “TRANSFORMERS: REVENGE OF THE FALLEN” and as Soundwave and Shockwave in “TRANSFORMERS: DARK OF THE MOON.”

Emmy and Golden Globe Award-winning actor John Goodman has lent his voice to numerous animated projects, including the films “CARS,” “MONSTERS, INC.,” “MONSTERS UNIVERSITY,” “THE PRINCESS AND THE FROG,” “THE EMPEROR’S NEW GROOVE” and “THE JUNGLE BOOK II,” as well as NBC’s animated series “Father of the Pride.” His recent live action films include the Academy Award®-winning “ARGO” and “THE ARTIST,” “THE MONUMENTS MEN,” “TROUBLE WITH THE CURVE,” “FLIGHT,” and “EXTREMELY LOUD AND INCREDIBLY CLOSE.” His many television credits include “Roseanne,” “Damages,” “Community,” “You Don’t Know Jack” and “Studio 60 on the Sunset Strip.”

Stage, film and television actor Ken Watanabe played General Tadamichi Kuribayashi in “LETTERS FROM IWO JIMA,” the Chairman in “MEMOIRS OF A GEISHA” and Lord Katsumoto Moritsugu in “THE LAST SAMURAI,” for which he was nominated for an Academy Award® for Best Supporting Actor. His most recent work includes roles in “BATMAN BEGINS,” “INCEPTION” and the upcoming “GODZILLA.”

Robert Foxworth is an accomplished stage and screen actor. He starred in the television series “Storefront Lawyers,” “Falcon Crest” and “LateLine,” and appeared as a recurring series character on “Six Feet Under,” “Law & Order,” “Law & Order: SUV” and as a guest on “Brothers & Sisters,” “Boston Legal,” “Bones,” “The West Wing” and “Gilmore Girls.” His recent Broadway credits include “August: Osage County” and “Twelve Angry Men.” Foxworth voiced the role of Ratchet in “TRANSFORMERS,” “TRANSFORMERS: REVENGE OF THE FALLEN” and “TRANSFORMERS: DARK OF THE MOON.”

John DiMaggio’s voice-over work includes television, film and video games. He has lent his voice to “Futurama,” for which he won an Annie Award for Outstanding Individual Achievement for Voice Acting by a Male Performer in an Animated Television Production, “The Simpsons,” “Teenage Mutant Ninja Turtles,” “American Dad,” “Penguins of Madagascar,” “Adventure Time with Finn and Jake,” “Kung Fu Panda (TV),” “Barnyard” and “Chowder.” He previously voiced Leadfoot and Target in “TRANSFORMERS: DARK OF THE MOON.”

Mark Ryan has been combining his acting, singing, writing and directing talents in a successful international career for more than 30 years. He performed in several major musicals in London’s West End, including four years in Andrew Lloyd Webber’s smash hit “Evita,” originating the role of Magaldi and then playing Ché. He originated the character of Nasir for the cult British TV series “Robin of Sherwood“ and has appeared in dozens of films and television series, both in the U.S. and UK. He previously voiced Bumblebee and Jetfire for the “TRANSFORMERS” film franchise and recently co-starred in the premiere season of “Black Sails,” Michael Bay’s provocative new television series for Starz.

Reno Wilson currently stars on the hit CBS comedy “Mike & Molly” as Officer Carl McMillan. He has appeared in such films as “MIGHTY JOE YOUNG,” “ROUGH DRAFT,” “FALLEN,” and “WHITE HYPE.” As an accomplished voice-over artist, he gave voice to the Decepticon Frenzy in “TRANSFORMERS,” the Autobot Mudflap in “TRANSFORMERS: REVENGE OF THE FALLEN,” and Brains in “TRANSFORMERS: DARK OF THE MOON.”