F9 Director Justin Lin On What's Next In the Fast Saga 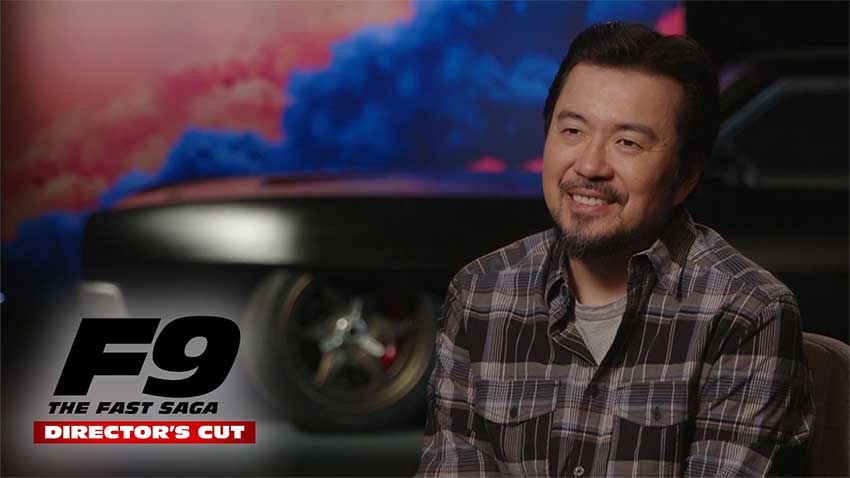 Justin Lin's director's cut for F9 is coming to Blu-ray and Digital on September 21st, and we sat down to talk about the next chapter in THE FAST SAGA.

Franchise veteran Justin Lin returns to the director’s seat for F9 and delivers a supercharged version in the latest FAST SAGA movie. The Director's Cut includes extended action scenes not shown in theaters and additional content only available on the home release on September 21st.

Lin will be wrapping up THE FAST SAGA in two more films. CineMovie asked Lin why he decided to return to the franchise and how he plans to approach the end of one of the most successful movie sagas of all time.

More about the F9 Director's Cut

Featuring the original theatrical release, the Director’s Cut and more than an hour of exclusive bonus content – including a behind-the-scenes look at the gravity-defying stunts and nitro-charged cars, a gag reel and even more justice for Han – fans can now add F9 to their collection to watch again and again!

Dom Toretto (Vin Diesel) thought he’d left his outlaw life in the rear-view mirror, but not even he can outrun the past. When his forsaken brother Jakob (John Cena, Bumblebee) unexpectedly resurfaces as an elite assassin, the crew comes back together to help Dom confront the sins of his own past and stop a world-shattering plot. Franchise veteran Justin Lin returns to the director’s seat for F9 and delivers this supercharged version of the hit film. From extended action to spectacular scenes that weren’t shown in theaters, F9: The Director’s Cut explodes with additional content that can only be experienced on home entertainment!

GAG REEL
F9: ALL IN: The Fast family invites you to be part of the crew as they give you an intimate look at how F9 propels this epic franchise to even greater heights. This bonus feature, with more than 46 minutes of content, includes returning characters, new cast members, huge stunts, big surprises, and so much more.

PRACTICALLY FAST: When it comes to stunts, it seems each film in The Fast Saga outdoes the last. In this piece, we examine how Justin Lin and his team go to great lengths to shoot as many stunts as they can in-camera and practically, giving the film an authenticity that cannot be achieved solely through visual effects or CGI.

SHIFTING PRIORITIES: We first met many of these characters when The Fast and the Furious was released in 2001. In the 20+ years since, not only have the characters themselves grown and evolved, but so have the actors that portray them. Art often imitates life, and we look at how that's particularly true in F9.

JUSTICE FOR HAN: Han is back! Sung Kang and Justin Lin discuss the genesis for the return of this beloved character, while the cast reveals how much it means to them to have Kang back along for the ride.

A DAY ON SET WITH JUSTIN LIN: The job of a director on any movie production is huge. The job of a director on a production the scale of F9 is immeasurable. Spend a day with Justin Lin and see just how demanding it is to navigate a production day when you're the one with all the answers.
JOHN CENA: SUPERCAR SUPERFAN: John Cena is a real-life car expert, and no franchise does cars like Fast. Watch John jump from exotic car to exotic car like a kid in a candy store, giving you a true fan's look at some of the rarest and most expensive automobiles in the world.

F9 will be available on 4K UHD, Blu-ray™, DVD and Digital.

4K Ultra HD delivers the ultimate movie watching experience. Featuring the combination of 4K resolution, the color brilliance of High Dynamic Range (HDR) and HDR10+, which delivers incredible brightness and contrast for each scene and immersive audio for a multidimensional sound experience.
Blu-ray™ unleashes the power of your HDTV and is the best way to watch movies at home, featuring 6X the picture resolution of DVD, exclusive extras and theater-quality surround sound.

Digital lets fans watch movies anywhere on their favorite devices. Users can instantly buy or rent.
The Movies Anywhere Digital App simplifies and enhances the digital movie collection and viewing experience by allowing consumers to access their favorite digital movies in one place when purchased or redeemed through participating digital retailers. Consumers can also redeem digital copy codes found in eligible Blu-rayTM and DVD disc packages from participating studios and stream or download them through Movies Anywhere.  Movies Anywhere is available only in the United States.