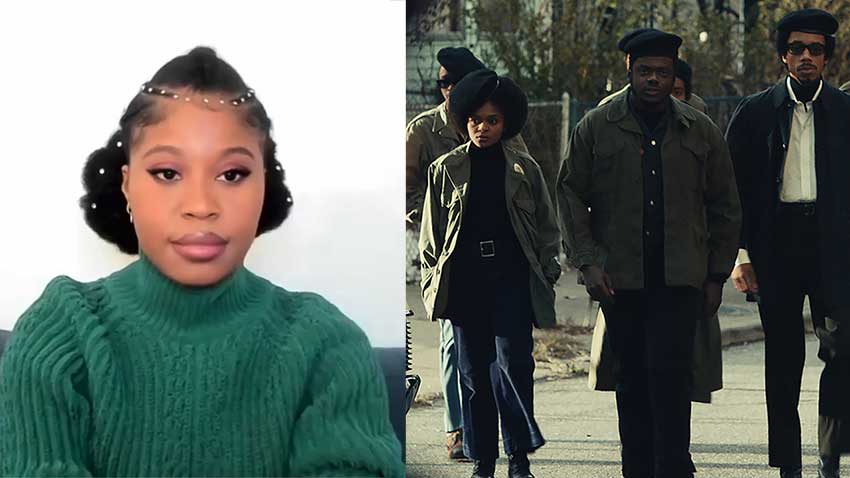 Dominique Fishback stars as Deborah Johnson, a member of the Illinois Black Panther party in JUDAS AND THE BLACK MESSIAH and Chairman Fred Hampton's love interest in the true story of the social activist who was assassinated by the police and FBI. She chats with CineMovie about playing a Black Panther member,  how women played a big part of the movement and starring opposite Daniel Kaluuya playing Chairman Hampton.

Fishback also starred with Jamie Foxx in PROJECT POWER on Netflix in 2020 so her career is on the upswing with a great performance in JUDAS AND THE BLACK MESSIAH.

In, JUDAS AND THE BLACK MESSIAH, FBI informant William O’Neal (LaKeith Stanfield) infiltrates Fred Hampton’s (Kaluuya) Illinois’ chapter of the Black Panther party. It led to the eventual cold-blooded murder of Hampton by the Chicago police on orders from the FBI.

FBI informant William O’Neal (LaKeith Stanfield) infiltrates the Illinois Black Panther Party and is tasked with keeping tabs on their charismatic leader, Chairman Fred Hampton (Daniel Kaluuya). A career thief, O’Neal revels in the danger of manipulating both his comrades and his handler, Special Agent Roy Mitchell (Jesse Plemons). Hampton’s political prowess grows just as he’s falling in love with fellow revolutionary Deborah Johnson (Dominique Fishback). Meanwhile, a battle wages for O’Neal’s soul. Will he align with the forces of good? Or subdue Hampton and The Panthers by any means, as FBI Director J. Edgar Hoover (Martin Sheen) commands?

Warner Bros. Pictures presents, in association with MACRO/Participant/BRON Creative, a MACRO Media/Proximity Production, a Film by Shaka King, “Judas and the Black Messiah.” The film is slated for release in theaters nationwide on February 12, 2021 and will be available in the U.S. on HBO Max for 31 days from theatrical release. It is distributed worldwide by Warner Bros. Pictures and has been rated R for violence and pervasive language.