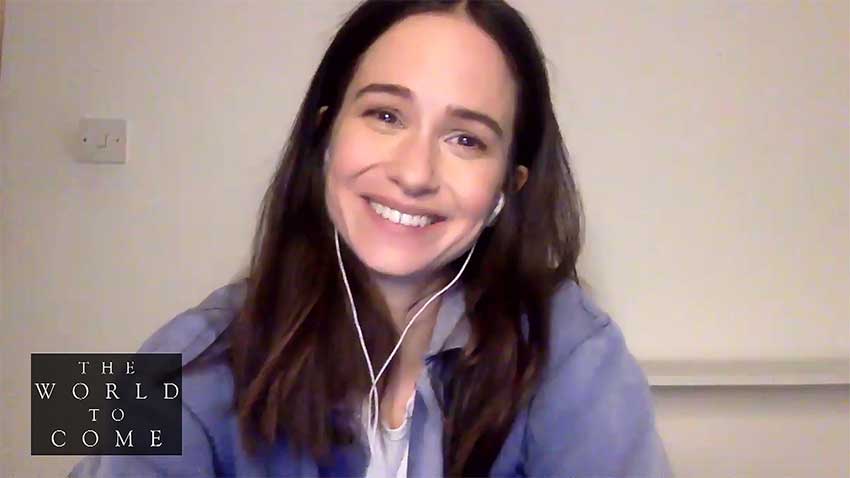 Katherine Waterston (FANTASTIC BEASTS0 stars with Vanessa Kirby, Casey Affleck and Christopher Abbott in THE WORLD TO COME. Waterston and director Mona Fastvold spoke to CineMovie about the movie which finds two women falling in love at a time when it wasn't accepted and when women had no voice.

Set in the mid-19 Century American frontier, two married women (Waterston, Kirby) strike up a friendship that turns into something much more. Abigail documents her feelings of loneliness and passion-less marriage in a journal which is heard in a poetic narration by Abigail.

THE WORLD TO COME is out in movie theaters February 12 and on Digital March 2.

MORE ABOUT THE WORLD TO COME
In this powerful 19th century romance set in the American Northeast, Abigail (Katherine Waterston), a farmer’s wife, and her new neighbor Tallie (Vanessa Kirby) find themselves irrevocably drawn to each other. A grieving Abigail tends to her withdrawn husband Dyer (Casey Affleck) as free-spirit Tallie bristles at the jealous control of her husband Finney (Christopher Abbott), when together their intimacy begins to fill a void in each other's lives they never knew existed. Directed by Mona Fastvold and scripted by Jim Shepard and Ron Hansen, THE WORLD TO COME explores how isolation is overcome by the intensity of human connection.