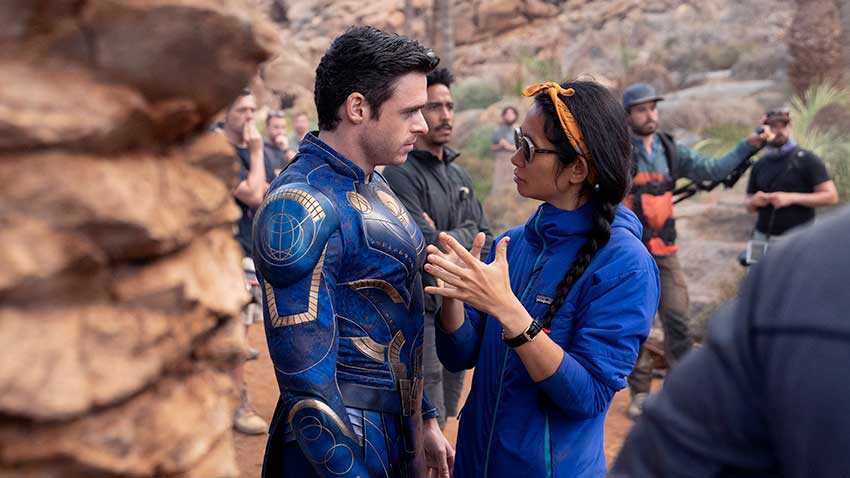 ETERNALS is not getting the usual Marvel reception from critics because of its slow pacing and overly talkative nature for a superhero movie, but Marvel Studios President Kevin Feige admits the studio was looking for something different in Phase 4 when they hired filmmaker like Chloe Zhao.

The Eternals are not your average superheroes. They have more in common with gods from Greek mythology. In the comics, Jack Kirby created them as a race of immortal beings who arrived on Earth during primitive times and helped shape human civilization and history. These ancient aliens have been living on Earth for thousands of years in the shadows but they reunite when their old foe, the Deviants threatens mankind's existence.

From the onset, ETERNALS looked like no other superhero movie ever. A diverse set of actors were cast with Gemma Chan, Salma Hayek, Kumail Nanjiani, Brian Tyree Henry and Lauren Ridloff bringing in some much-needed flavor into the mix. Adding Academy Award-winning filmmaker Chloe Zhao to the recipe was certainly an indication of where this Phase 4 project was headed.

In the MCU movie, the Celestial beings don't view themselves as superheroes rather protectors of Earth and the human race. They are reluctant in interfering with human's destructive behavior although they do influence their evolution through the centuries.

However, the film explores the conflicting nature of their presence on Earth. Each character grapples with their existence among the humans. ETERNALS doesn't play like most MCU films. While there's plenty of action scenes, Zhao spends a chunk of the time exploring each character's arc, hence there's tons of exposition and flashbacks to their early days on Earth.

ETERNALS comes off more like a thinking person's piece rather than a straight-up superhero action flick. When asked if Marvel Studios intended to go in that direction, Feige confirms they were looking to take it to a different level.

"Absolutely, that was the whole idea. And Nate Moore, our producer who is not up here with us, really had that driving vision for what this could be. And when Chloe came in and pitched it to us and took sort of these very general ideas that we had and obviously the Jack Kirby spectacular source material, it felt like a very new special step for us."

Chloe revealed she quoted a William Blake poem and showed Feige an image of macro sand in her initial meeting with him.

"I still was allowed to stay in the room, so it was really nice," joked Zhao at the movie's press conference. "But in that poem, Blake was trying to convey that you can see the endless beauty and the meanings of the cosmos within the smallest things you can find on earth. So we were really, you know, the vision of the film was to set up, to capture that scale. Something as large as the creation of the sun and as intimate as whispers of lovers. So I think going on location and doing this kind of immersive shoot and having the supportive understanding of this amazing cast was kind of how we got here today."

The end product is a very existential movie that may not be for everyone but most can agree it's beautifully crafted.