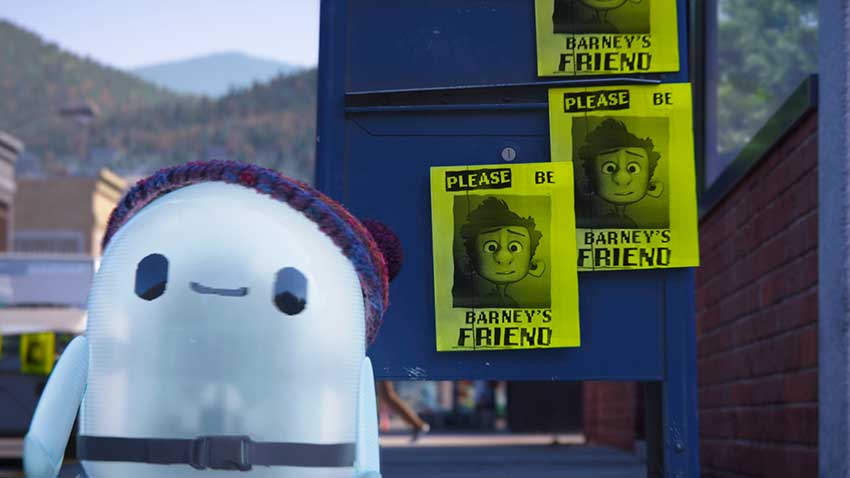 CineMovie was fortunate enough to see the first 20 minutes of the animated movie, RON’S GONE WRONG and the filmmakers revealed what inspired the film about a child whose only friend is a defective AI.

Jack Dylan Grazer voices Barney, a socially awkward middle-schooler with no friends until his grandmother buys him a cool walking, talking B-Bot but the malfunctioning AI gets Barney into some necessary trouble.

The first few scenes set up Barney’s lonely existence as the only kid in school without a “Best Friend out of the Box,” a digital companion used by his peers to constantly feed their social media hunger. Barney’s family is in a bit of a rough patch and can’t afford to purchase a digital buddy. That is until his grandmother presents Barney with one named Ron. However, Barney runs into trouble connecting Ron to program him and misadventures ensue when Barney’s father attempts to take Ron in for an exchange. The usually shy Barney is now on the run with Ron so he won’t be junked, and getting into the kind of trouble Barney never imagined he’d be in.

Ron, the “Best Friend out of the Box” is voiced by the hilarious Zach Galifianakis who brings his usual quirkiness to the troublemaking adventures. Galifianakis and Grazer recorded their dialogue together, a rarity in the animation process.

“One of the massive highlights I think we all experienced was with putting Zach Galifianakis and Jack Dylan Grazer together,” says one of the directors Jean-Philippe Vine. “And that, you know, just watching, we really wanted to see how an improvised argument would between them work out, and they’re both kind of… they’re both brilliant improvisers, Zach by this point had really kind of nailed that kind of naive factual, quite rude and funny delivery that Ron can do.”

From the footage previewed, the fun in RON’S GONE WRONG is the opposite nature between Jack and Zach that’s going to help Barney come out of his awkwardness. At the core, the movie explores a friendship set against the backdrop of the social media age. While Ron is a defective AI, his relationship with Barney is no different than any other human connection.

“It’s massively important to dive in for five years of your life to make a film, says Vine. “And our movie which really talks about friendship and what is a good healthy friendship and how messy that can be, I really connected to it, especially as a parent because you know, my oldest son was really struggling with friendships in his pre-teen period and kind of really struggling with which group he belonged to. And it really helped me as we worked with Barney the main character. And just as, thematically this idea this kind of take away of the movie that a good friendship has conflict and that’s okay.

Rodriguez also adds friendship can also be about challenging one another and putting you in check which is at the heart of the film. “In the end hopefully when you guys watch this you’ll have those questions about ‘what is a true friend?’

While there’s plenty of films about artificial intelligence developing feelings and emotions, director Sarah Smith says RON’S GONE WRONG is not that kind of movie.

“In a way, this movie’s not really so much about the robot AI idea, says Smith. “It’s not about that kind of Artificial Intelligence. It’s actually about something which kids have in their homes. It’s about the way their iPad talks to them, you know? It’s really about social media and the online experience. And it’s much more about that than it is about the kind of idea of ‘does something have sentience?’”

In the clips previewed, RON’S GONE WRONG pokes fun at youth’s increasing obsession with their devices and constant need to be seen on social media. When Ron goes haywire, oddly enough the AI forces Barney to explore a life outside the digital realm.