Taylor Russell stars in WORDS ON A BATHROOM WALL as a high school student tutoring a fellow student who suffers from schizophrenia (Charlie Plummer). CineMovie talked to the 26-year-old actress about her new movie, and whether she thinks looking young is a blessing or a curse.

You'll recognize Russell from her role as Judy Robinson on Netflix's "Lost in Space," and in her memorable role last year in the critically-acclaimed WAVES. Once again she's playing a complicated and smart young lady in the new film, WORDS ON A BATHROOM WALL.  The actress recently celebrated her 26th birthday, but she tends to play recurring roles as teenagers.

CineMovie sat down with her via a Zoom call to talk about the difficult subject of mental health, and how she goes about picking her roles, and if her young looks are a detriment to her career.

WORDS ON THE BATHROOM WALLS opens in theaters and drive-ins on August 21. 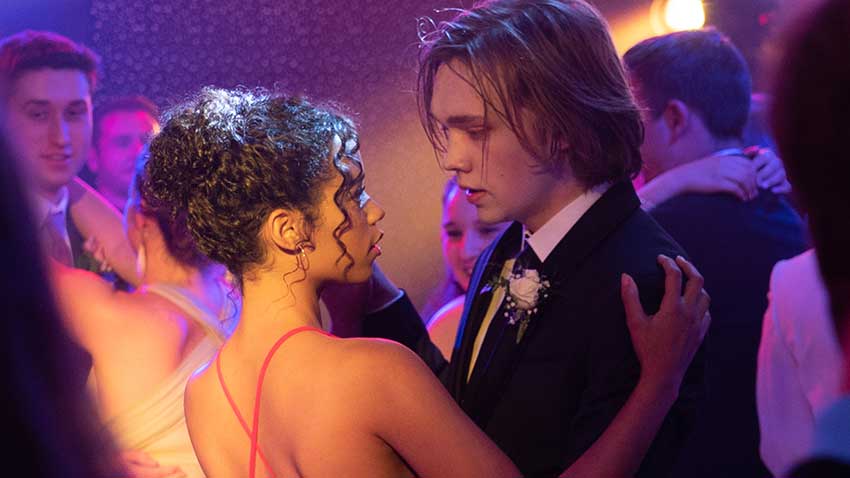 More about the film:

WORDS ON BATHROOM WALLS tells the story of witty and introspective Adam (Charlie Plummer), who appears to be your typical young adult – a little unkempt with raging hormones and excited about a future pursuing his dream of becoming a chef.  Expelled halfway through his senior year following an incident in chemistry class, Adam is diagnosed with a mental illness.   Sent to a Catholic academy to finish out his term, Adam has little hope of fitting in and just wants to keep his illness secret until he can enroll in culinary school. But when he meets outspoken and fiercely intelligent Maya (Taylor Russell), there is an instant soulful and comforting connection.  As their romance deepens, she inspires him to open his heart and not be defined by his condition. Now, with the love and support of his girlfriend and family, Adam is hopeful for the very first time that he can see the light and triumph over the challenges that lie ahead.